DiRado is the daughter of Marit (née Parker) and Ruben DiRado. Her father is from Argentina, his parents having immigrated from Italy to Argentina after World War II. She received her short name Maya from her sister who could not pronounce Madeline.

DiRado began swimming at the age of six, when she joined the Santa Rosa Neptunes with her Olympic Teammate Molly Hannis. At the age of 17, DiRado graduated from Maria Carrillo High School in Santa Rosa, where she was a three-time high school state champion in the 200 yard IM. In her senior year in 2010, she set the California state record with a time of 1:56.17 in the 200 yard I.M. She also won the 100 yard freestyle with a time of 49.83.

As part of a long line of Stanford graduates, DiRado followed in her family's footsteps and attended Stanford University. In her freshman year, she finished second in the 200 yard IM (individual medley) with a time of 1:54.66 and third in the 400 yard IM (4:01.02) at the Division 1 NCAA Championships. The following year, she finished third and fourth in the 200 yard and 400 yard IM events, as well as second in the 200 yard backstroke to future Olympic teammate Elizabeth Beisel, with a time of 1:51.42. She set the age group record for female swimmers age 17–18 as she became the fifth woman ever to swim under four minutes in the 400 IM (3:59.88). In the 2013 NCAA Division 1 Championships, DiRado touched third and second in the 200 and 400 yard IM and fifth in 200 yard backstroke. She concluded her Stanford career with her first individual titles in both the 200 and 400 yard IM, and added a second-place finish in the 200 yard butterfly. For her performance in her senior year, she was named Pac-12 Swimmer of the Year.

She swam the preliminary heat of the 4x200 meter freestyle relay with Chelsea Chenault, Karlee Bispo, and Jordan Mattern. The finals team of Katie Ledecky, Shannon Vreeland, Karlee Bispo, and Missy Franklin won the 4x200 meter freestyle relay in the evening, so DiRado was awarded a gold medal for her prelim contributions. She also finished fourth in the 400 meter IM and twelfth in the 200 meter fly.

DiRado swam two events at the 2015 World Championships, the two individual medleys. In her first event, the 200 meter IM, DiRado just finished outside of a medal, touching fourth with a time of 2:08.99. However, she won her first individual World Championship medal in the 400 meter IM, in which she finished second in 4:31.71 behind Katinka Hosszú.

At the 2016 Olympic Games in Rio de Janeiro, Brazil, DiRado won four medals – two gold, one silver, and one bronze. On the first night of competition, DiRado touched second in the 400-meter individual medley in 4:31.15 behind Katinka Hosszú, who broke the world record. She also won a bronze medal in the 200-meter individual medley in a personal best time of 2:08.79, behind Hosszú and Siobhan-Marie O'Connor who won gold and silver respectively. Even though she did not swim the 200-meter freestyle at Trials, DiRado was placed in the finals relay lineup for the 4×200-meter freestyle relay by the coaches. Along with Allison Schmitt, Leah Smith, and Katie Ledecky, DiRado won her first gold medal of the Olympics. In her final event, the 200-meter backstroke, DiRado again faced Hosszú, who was favored to win the event. Hosszú led for the entire race until DiRado surged in the last 25 meters and out touched Hosszú by 6 one-hundredths, 2:05.99 to 2:06.05, for the win. 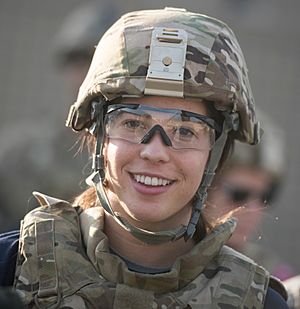 DiRado visiting a U.S. military base in Afghanistan in December 2016

DiRado retired from the competitive swimming side of the sport following her performances in August 2016 at her Olympic debut in the 2016 Summer Olympics. She decided to stay active in the swimming community after her retirement by serving as a board member for the United States Swimming Foundation and USA Swimming.

In 2020, DiRado spoke to the leadership council at the University of Minnesota about what it means to be a good team player and leader in swimming through actions such as honoring one's values. She was still retired from competitive swimming as of July 2021.

DiRado married former Stanford swimmer Rob Andrews on September 19, 2015 at First Presbyterian Church in Santa Rosa, California. The two met while they were both on the Stanford swim team. In March of 2017, she joined the management consulting firm McKinsey & Company as a Business Analyst. While at McKinsey & Company, DiRado supported strategic health care provider procurement improvements and implemented risk identification programs in the banking industry. As of May 2018, she was an Associate at the grantmaking organization King Philanthropies. DiRado graduated from Stanford with a Bachelor of Science in Management Science and Engineering.

In July 2021, DiRado took to her Twitter account to express her discontent that Olympian Michael Andrew had decided not to receive a COVID-19 vaccine, emphasizing her points by showcasing her Christianity and citing the Bible.

All content from Kiddle encyclopedia articles (including the article images and facts) can be freely used under Attribution-ShareAlike license, unless stated otherwise. Cite this article:
Maya DiRado Facts for Kids. Kiddle Encyclopedia.