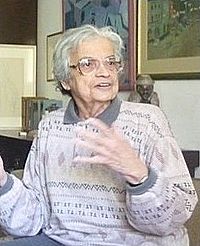 Maya Ulanovskaya (October 20, 1932 – June 25, 2020) was an American-born Russian-Israeli translator, writer and activist. Along with her husband, Anatoly Yakobson, were key figures in the dissident movement in the USSR. In the 1960s - 1970s, Ulanovskaya worked at the Institute of Scientific Information on Social Sciences of the Russian Academy of Sciences (INION RAN) library in Moscow.

All content from Kiddle encyclopedia articles (including the article images and facts) can be freely used under Attribution-ShareAlike license, unless stated otherwise. Cite this article:
Maya Ulanovskaya Facts for Kids. Kiddle Encyclopedia.