The meadow vole (Microtus pennsylvanicus), sometimes called the field mouse or meadow mouse, is a North American vole found across Canada, Alaska and the northern United States. Its range extends farther south along the Atlantic coast. One subspecies, the Florida salt marsh vole (M. p. dukecampbelli), is found in Florida, and is classified as endangered. Previously it was also found in Chihuahua, Mexico, but has not been recorded since 1998.

The meadow vole is active year-round, usually at night. It also digs burrows, where it stores food for the winter and females give birth to their young. Although these animals tend to live close together, they are aggressive towards one another. This is particularly evident in males during the breeding season. They can cause damage to fruit trees, garden plants, and commercial grain crops.

The meadow vole has the widest distribution of any North American species of Microtus. It ranges from Labrador west to Alaska and south from Labrador and New Brunswick to South Carolina and extreme northeastern Georgia; west through Tennessee, Missouri, north-central Nebraska, the northern half of Wyoming, and central Washington to Alaska; south through Idaho into north-central Utah. It is excluded only from the extreme polar regions. A disjunct subset of its range occurs from central Colorado to northwestern New Mexico. The United States portion of the Souris River is alternately known as the Mouse River because of the large numbers of field mice that lived along its banks.

Meadow voles are most commonly found in grasslands, preferring moister areas, but are also found in wooded areas. In eastern Washington and northern Idaho, meadow voles are found in relative abundance in sedge (Carex spp.) fens, but not in adjacent cedar (Thuja spp.)-hemlock (Tsuga spp.), Douglas-fir (Pseudotsuga menziesii), or ponderosa pine (Pinus ponderosa) forests. Meadow voles are also absent from fescue (Festuca spp.)-snowberry (Symphoricarpos spp.) associations. Moisture may be a major factor in habitat use; possibly the presence of free water is a deciding factor. In southeastern Montana, meadow voles were the second-most abundant small mammal (after deer mice, Peromyscus maniculatus) in riparian areas within big sagebrush (Artemisia tridentata)-buffalo grass (Buchloe dactyloides) habitats. Meadow voles are listed as riparian-dependent vertebrates in the Snake River drainage of Wyoming. In a compilation of 11 studies on small mammals, meadow voles were reported in only three of 29 sites in subalpine forests of the central Rocky Mountains. Their range extensions were likely to be related to irrigation practices. They are now common in hayfields, pastures, and along ditches in the Rocky Mountain states. 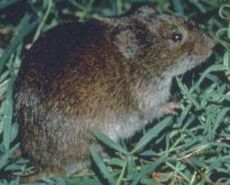 Meadow voles are active year-round and day or night, with no clear 24-hour rhythm in many areas. Most changes in activity are imposed by season, habitat, cover, temperature, and other factors. Meadow voles have to eat frequently, and their active periods (every two to three hours) are associated with food digestion. In Canada, meadow voles are active the first few hours after dawn and during the two- to four-hour period before sunset. Most of the inactive period is spent in the nest.

Gestation lasts 20 to 23 days. Neonates are pink and hairless, with closed eyes and ears. Fur begins to appear by three days, and young are completely furred except for the belly by seven days. Eyes and ears open by eight days. Weaning occurs from 12 to 14 days. Young born in spring and early summer attain adult weight in 12 weeks, but undergo a fall weight loss. Young born in late summer continue growing through the fall and maintain their weight through the winter. Maximum size is reached between two and 10 months.

Typical meadow vole litters consist of four to six young, with extremes of one and 11 young. On average, 2.6 young are successfully weaned per litter. Litter size is not significantly correlated with latitude, elevation, or population density. Fall, winter, and spring litters tend to be smaller than summer litters. Litter size was positively correlated with body size, and is not significantly different in primaparous and multiparous females. Primaparous females had fewer young per litter than multiparous females. Litter size was constant in summer breeding periods at different population densities. Female meadow voles reach reproductive maturity earlier than males; some ovulate and become pregnant as early as three weeks old. Males are usually six to eight weeks old before mature sperm are produced. One captive female produced 17 litters in one year for a total of 83 young. One of her young produced 13 litters (totalling 78 young) before she was a year old. 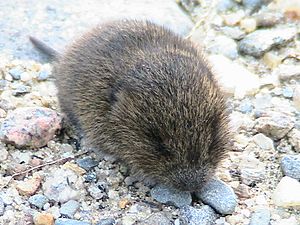 Juvenile in the open

Patterns of mortality apparently vary among meadow vole populations. The average meadow vole lifespan is less than one month because of high nestling and juvenile mortality. The average time adults are recapturable in a given habitat is about two months, suggesting the average extended lifespan (i.e. how much time adult meadow voles have left) is about two months, not figuring in emigration. Mortality was 88% for the first 30 days after birth,. and postnestling juveniles had the highest mortality rate (61%), followed by young adults (58%) and older age groups (53%). Nestlings were estimated to have the lowest mortality rate (50%). Estimated mean longevity ranges from two to 16 months. The maximum lifespan in the wild is 16 months, and few voles live more than two years.

Meadow vole populations fluctuate annually and also tend to reach peak densities at two- to five-year intervals, with population declines in intervening years. Breeding often ceases in January and starts again in March. Over the course of a year, meadow vole populations tend to be lowest in early spring; the population increases rapidly through summer and fall.

Normal population cycles do not occur when dispersal is prevented; under normal conditions, dispersers have been shown to be behaviorally, genetically, and demographically different from residents. A threshold density of cover is thought to be needed for meadow vole populations to increase. Above the threshold amount, the quantity of cover influences the amplitude and possibly the duration of the population peak. Local patches of dense cover could serve as source populations or reservoirs to colonize less favorable habitats with sparse cover. 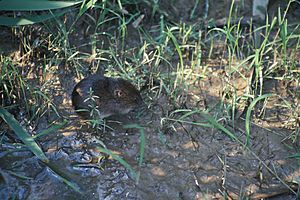 On the ground amid strands of grass in Virginia, US

In eastern Massachusetts, meadow vole density on a mosaic of grassy fields and mixed woods was positively correlated with decreasing vertical woody stem density and decreasing shrub cover. Density was highest on plots with more forbs and grasses and less with woody cover; meadow voles preferred woody cover over sparse vegetation where grassy cover was not available.

In Ohio, the effects of patch shape and proportion of edge were investigated by mowing strips between study plots. The square plots were 132 feet per side (40 m x 40 m), and the rectangular patches were 52.8 feet by 330 feet (16 m x 100 m). Square habitat patches were not significantly different from rectangular patches in meadow vole density. Edge effects in patches of this size were not found, suggesting meadow voles are edge-tolerant. Habitat patch shape did affect dispersal and space use behaviors. In rectangular patches, home ranges were similar in size to those in square patches, but were elongated.

Meadow voles tend to remain in home ranges and defend at least a portion of their home ranges from conspecifics. Home ranges overlap and have irregular shapes. Home range size depends on season, habitat, and population density: ranges are larger in summer than winter, those in marshes are larger than in meadows, and are smaller at higher population densities. Home ranges vary in size from 0.08 to 2.3 hectares (0.32-0.9 ac). Females have smaller home ranges than males, but are more highly territorial than males; often, juveniles from one litter are still present in the adult female's home range when the next litter is born. Female territoriality tends to determine density in suboptimal habitats; the amount of available forage may be the determining factor in female territory size, so determines reproductive success.

Nests are used as nurseries, resting areas, and as protection against weather. They are constructed of woven grass; they are usually subterranean or are constructed under boards, rocks, logs, brush piles, hay bales, fenceposts, or in grassy tussocks. Meadow voles dig shallow burrows, and in burrows, nests are constructed in enlarged chambers. In winter, nests are often constructed on the ground surface under a covering of snow, usually against some natural formation such as a rock or log.

Meadow voles eat most available species of grasses, sedges, and forbs, including many agricultural plant species. In summer and fall, grasses are cut into match-length sections to reach the succulent portions of the leaves and seedheads. Leaves, flowers, and fruits of forbs are also typical components of the summer diet. Fungi, primarily endogones (Endogone spp.), have been reported in meadow vole diets. They occasionally consume insects and snails, and occasionally scavenge on animal remains; cannibalism is frequent in periods of high population density. Meadow voles may damage woody vegetation by girdling when population density is high.

In winter, meadow voles consume green basal portions of grass plants, often hidden under snow. Other winter diet components include seeds, roots, and bulbs. They occasionally strip the bark from woody plants. Seeds and tubers are stored in nests and burrows. Evidence of coprophagy is sparse, but thought to occur.

Meadow voles are abundant in agricultural habitats. The list of crops damaged by meadow voles includes root and stem crops (asparagus, kohlrabi), tubers, leaf and leafstalks, immature inflorescent vegetables (artichoke, broccoli), low-growing fruits (beans, squash), the bark of fruit trees, pasture, grassland, hay, and grains. Meadow voles are listed as pests on forest plantations. In forest plantations in British Columbia, an apparently abundant (not measured) meadow vole population was associated with a high rate of "not sufficient regeneration"; damage to tree seedlings was attributed to meadow voles and lemmings (Synaptomys spp.). In central New York, colonization of old fields by trees and shrubs was reduced due to seedling predation by meadow voles, particularly under the herb canopy.

Management of meadow vole populations in agricultural areas includes reduction of habitat in waste places such as roadsides and fencerows by mowing, plowing, and herbicide application. Predators, particularly raptors, should be protected to keep meadow vole populations in check. Direct control methods include trapping, fencing, and poisoning; trapping and fencing are of limited effectiveness. Poisons are efficient. Repellents are largely ineffective at present. Plastic mesh cylinders were effective in preventing seedling damage by meadow voles and other rodents. Properly timed cultivation and controlled fires are at least partially effective in reducing populations.

Ecto- and endoparasites have been reported to include trematodes, cestodes, nematodes, acanthocephalans, lice (Anoplura), fleas (Siphonaptera), Diptera, and ticks and mites (Acari).

As with many other small mammal species, M. pennsylvanicus plays important ecological roles. The meadow vole is an important food source for many predators, and disperses mycorrhizal fungi. It is a major consumer of grass and disperses grass nutrients in its feces. After disruptive site disturbances such as forest or meadow fires, the meadow vole's activities contribute to habitat restoration. It prefers open, nonforest habitats and colonizes such open areas created by fire or other clearing disturbances. Very few meadow voles are found in forest or woodland areas. In newly opened areas, it is quite abundant. In these new open areas, the vole quickly becomes a food source for predators.

All content from Kiddle encyclopedia articles (including the article images and facts) can be freely used under Attribution-ShareAlike license, unless stated otherwise. Cite this article:
Meadow vole Facts for Kids. Kiddle Encyclopedia.