Melaleuca nodosa, commonly known as the prickly-leaved paperbark, is a plant in the myrtle family, Myrtaceae and is endemic to eastern Australia. It is a shrub or small tree with narrow, sometimes needle-like leaves and profuse heads of yellow flowers as early as April or as late as January.

The flowers are white to yellow and arranged in dense heads or short spikes on the ends of branches that continue to grow after flowering and sometimes also in the upper leaf axils. Each head is up to 30 mm (1 in) in diameter and contains up to 20 groups of flowers in threes. The petals are 1.8–2.3 mm (0.07–0.09 in) long and fall off as the flower matures. There are five bundles of stamens around the flower, each with 7 to 10 stamens. Flowering occurs from September to November, most prevalent in October but often at other times of the year. The fruit that follow are woody, cup-shaped capsules, 3–5 mm (0.1–0.2 in) long, 2–3 mm (0.08–0.1 in) wide, usually in tight, globular clusters along the stems. 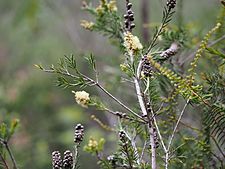 German botanist Joseph Gaertner was the first to formally describe the prickly-leaved paperbark from material in the collection of Joseph Banks, as Metrosideros nodosa, in his De Fructibus et Seminibus Plantarum in 1788. James Edward Smith gave it its current binomial name in 1797. The specific epithet (nodosa) is from the Latin nodosus meaning "knotty" or "knobby" possibly referring to the shape of the fruiting clusters.

Native bees, honeybees and possibly beetles and flies pollinate the flowers of this species. Melaleuca nodosa has been recorded as a host for the mistletoe species Amyema congener, A. gaudichaudii, Dendrophthoe curvata and D. vitellina.

Melaleuca nodosa adapts readily to cultivation and grows best in full sun and with extra moisture. Although it is not widely grown, it has potential as a hedging plant, including in areas exposed to salt spray.

All content from Kiddle encyclopedia articles (including the article images and facts) can be freely used under Attribution-ShareAlike license, unless stated otherwise. Cite this article:
Melaleuca nodosa Facts for Kids. Kiddle Encyclopedia.