Melanthera biflora is a moderately salt-tolerant plant found in the tropical belt of the Indo-Pacific region, including China, the Indian Subcontinent, Southeast Asia, Queensland, and islands of the Pacific such as Fiji, Niue, Tonga, Samoa and the Cook Islands.

It is found commonly in islands and in coastal areas, although it sometimes occurs inland in neglected and unmanaged plantations as well as in ruderal environments.

Together with Portulaca oleracea, Ipomoea pes-caprae and Digitaria ciliaris, Melanthera biflora is usually one of the first species colonizing degraded or altered environments in tropical zones of the planet.

Melanthera biflora is a hardy and somewhat woody, sprawling perennial herb or subshrub. Stems are elongate and branched; they can reach up to 2 m but will bend after reaching a certain height. 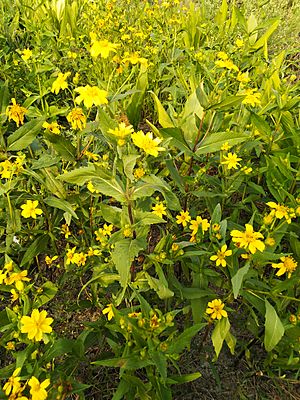 It can scramble and straggle over the ground or climb leaning on other plants for support. The leaves are ovate, shortly tapering at the base. It produces small yellow flower heads with a diameter of about 8–10 mm. The fruits form a dense head.

Despite the rough appearance of the plant, the leaves are edible. In Malaysian cuisine the shoots are eaten cooked as a leaf vegetable and in Langkawi they are eaten raw with chilli and sambal shrimp paste. Leaves also have traditional medicinal uses as poultice or as decoction.

Melanthera biflora has traditionally been used as a medicinal plant in many cultures, including in Marovo in the Solomon Islands. Leaves are especially valued against stomachache. In Fiji the leaves are used to treat acne. Root extracts have anthelmintic properties and flowers can be used as a purgative.

All content from Kiddle encyclopedia articles (including the article images and facts) can be freely used under Attribution-ShareAlike license, unless stated otherwise. Cite this article:
Melanthera biflora Facts for Kids. Kiddle Encyclopedia.