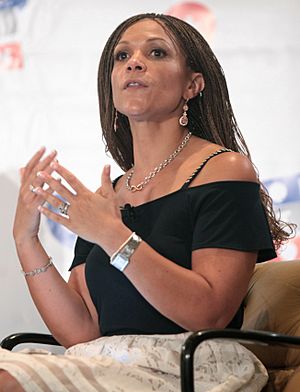 She got a Ph.D. in political science from Duke University in 1999. That year she married Dennis Lacewell. She divorced him in 2005. She is a professor of political science at Tulane University. In 2004 her first book Barbershops, Bibles, and BET: Everyday Talk and Black Political Thought was published. In 2011 Yale Press published Perry's book Sister Citizen: Shame, Stereotypes, and Black Women in America.

All content from Kiddle encyclopedia articles (including the article images and facts) can be freely used under Attribution-ShareAlike license, unless stated otherwise. Cite this article:
Melissa Harris-Perry Facts for Kids. Kiddle Encyclopedia.