Menard is a city in and the county seat of Menard County, Texas, United States. The population was 1,653 at the 2000 census. 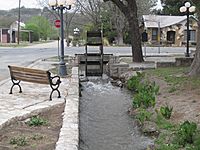 "The Historic Ditch Walk" began in 1876, when the Vaughn Agricultural and Mechanical Canal Company sought to provide irrigation by gravity flow from the nearby San Saba River to 2000 acres of land and to provide power for gristmills. 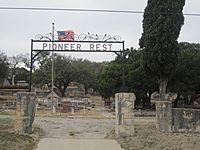 Pioneer Rest Cemetery in Menard has graves from the 19th century. 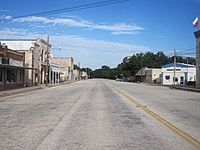 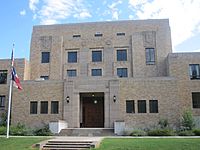 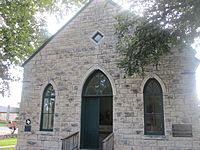 Sacred Heart Catholic Church (1899 building) in Menard: On the right outside wall of the church is a plaque recalling the massacre and destruction in 1758 of the Mission Santa Cruz de San Sabá three miles to the east of Menard. 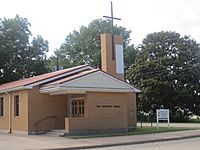 According to the United States Census Bureau, the city has a total area of 2.1 square miles (5.4 km2), all of it land.

The first settlement at the site of what is now Menard was the Spanish Mission San Sabá and the Presidio of San Luís de Amarillas, both established in April 1757. The presidio was later replaced by the Presidio of San Sabá in 1761. Both were intended to protect New Spain's northern frontier from marauding Comanches. Due to the presidio's isolation, it suffered repeated attacks, and was finally abandoned in 1770. Stones from the old presidio walls were used by later settlers to build homes and fences. The ruins of the old presidio were reconstructed in 1936.

The community was first known as Menardville when the site was laid out in 1858, after the formation of Menard County. Nearby Fort McKavett was deactivated in 1859, leaving the settlers with little protection from frequent Indian raids. The fort reopened after the Civil War. By 1867, Menardville had a store, a blacksmith shop, and a saloon. The community served as a trading post and overnight stop on north and west cattle trails. A county government was organized in 1871 and a two-story courthouse was built one year later. Menardville had approximately 150 residents by the mid-1880s. The San Saba River flooded in 1899, causing considerable damage to the community.

In 1910 or 1911, while the Fort Worth and Rio Grande Company was making plans to lay a track through the community, company officials asked residents to rename their town Menard to facilitate the painting of signs. An economic boom followed the arrival of the first train in 1911. The 1920 census recorded 1,164 people living in Menard. For many years, the town served as the principal shipping point for Menard County. Although the community was affected by the Great Depression, both of its banks – the Menard National Bank and Bevans State Bank – remained open. Menard's population stood at 1,969 in 1930, 2,375 in 1940, and 2,685 in 1950. That figure began to decline during the 1950s and 1960s, as road improvements made travel and shipping less dependent on rail service. The Atchison, Topeka and Santa Fe Railroad discontinued its service to Menard in 1972, but donated the depot to the county for use as a history museum. The Menard County Historical Society began collecting artifacts in 1975 and dedicated the museum in 1978. By 1980, 1,697 people were living in Menard. In 1990, the population fell slightly to 1,606 before rebounding to 1,653 in 2000.

Annual events in Menard include the Jim Bowie Trail Ride in September, and the Silver Mine Classic Lamb Show in October.

The climate in this area is characterized by hot, humid summers and generally mild to cool winters. According to the Köppen Climate Classification system, Menard has a humid subtropical climate, abbreviated "Cfa" on climate maps.

All content from Kiddle encyclopedia articles (including the article images and facts) can be freely used under Attribution-ShareAlike license, unless stated otherwise. Cite this article:
Menard, Texas Facts for Kids. Kiddle Encyclopedia.