According to both published and unpublished reports, the then Woizero Menen Asfaw was first given in marriage by her family to the prominent Wollo nobleman, Dejazmach Ali of Cherecha at a very young age, as was the prevailing custom. She bore him two children, a daughter, Woizero Belaynesh Ali, and a son, Jantirar Asfaw Ali. This first marriage ended in divorce, and her natal family then arranged for Woizero Menen to marry Dejazmach Amede Ali Aba-Deyas, another very prominent nobleman of Wollo. She bore her second husband two children as well, a daughter, Woizero Desta Amede, and a son, Jantirar Gebregziabiher Amede. Following the sudden death of her second husband, Woizero Menen's grandfather, Negus Mikael arranged her marriage to Ras Leulseged Atnaf Seged, a prominent Shewan nobleman, who was considerably older than Woizero Menen in late 1909 or early 1910. It is unclear whether Woizero Menen was married to the aged nobleman (and secured a divorce shortly afterwards to marry her royal groom) or whether there was only an engagement between them which was broken without ado. 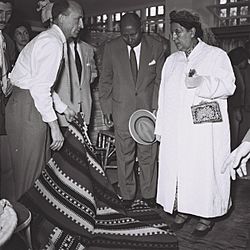 Empress Menen Asfaw from Ethiopia on a private visit to Israel. 6 May 1959

The account given in the Autobiography of the Emperor, My Life and Ethiopia's Progress, mentions no previous marriage or children of Empress Menen and no such order by Iyasu, but states only that at the age of 20, they were married by their own mutual consent, and describes her as "a woman without any malice whatsoever". When Tafari Makonnen became Emperor of Ethiopia as Haile Selassie I, Menen Asfaw was crowned as Empress at his side. Empress Menen had no children by Ras Leulseged.

Empress Menen was active in promoting women's issues in Ethiopia, was Patroness of the Ethiopian Red Cross, and the Ethiopian Women's Charitable Organization. She was also patroness of the Jerusalem Society that arranged for pilgrimages to the Holy Land. She founded the Empress Menen School for Girls in Addis Ababa, the first all-girls school which had both boarding and day students. Girls from all over the Empire were brought to the school to receive a modern education, encouraged by the Empress who visited it often and presided over its graduation ceremonies. The Empress gave generously, as well as sponsored programs for the poor, ill and disabled. She was also a devoutly religious woman who did much to support the Ethiopian Orthodox Tewahedo Church. She built, renovated and endowed numerous churches in Ethiopia and in the Holy Land. Prominent among these are the St. Raguel Church in Addis Ababa's Merkato district, the Kidane Mehret (Our Lady Covenant of Mercy) Church on Mount Entoto, and the Holy Trinity Monastery on the banks of the River Jordan in the Holy Land. She gave generously from her personal funds towards the building of the new Cathedral of St. Mary of Zion at Axum, but did not live to see it completed and dedicated.

When the Empress was exiled from Ethiopia during the Italian occupation from 1936 to 1941, she made a pledge to the Virgin Mary at the Church of the Nativity in Bethlehem, promising to give her crown to the church if Ethiopia were liberated from occupation. The Empress made numerous pilgrimages to Holy Sites in then British-ruled Palestine, in Syria and in Lebanon, during her exile to pray for her occupied homeland. Following the return of Emperor Haile Selassie I and his family to Ethiopia in 1941, a replica of the crown was made for future Empresses, but the original crown that Empress Menen was crowned with at her husband's side in 1930 was sent to the Church of the Nativity in Bethlehem. Empress Menen, although often seen wearing a tiara at public events that called for it, would never again wear a full crown.

Empress Menen performed perfectly in the role of Empress-consort. In her public role she combined religious piety, concern for social causes, and support for development schemes with the majesty of her Imperial status. Outwardly she was the dutiful wife, visiting schools, churches, exhibitions and model farms, attending public and state events at her husband's side or by herself. She took no public stand on political or policy issues. Behind the scenes however, she was the Emperor's most trusted advisor, quietly offering advice on a whole range of issues. She avoided the publicly political role that her predecessor as Empress-consort, Empress Taytu Betul, had taken, which had caused deep resentment in government circles during the reign of Menelik II.

The Empress and some of her family were placed under house arrest briefly during the 1960 Imperial Guard coup attempt against her husband at her villa outside the Guenete Leul Palace grounds in northern Addis Ababa. Following the return of the Emperor and the crushing of the coup attempt, there was much speculation as to the conduct of the Crown Prince, who had been proclaimed monarch by the coup leaders. It was noted that the Crown Prince had accompanied his mother in a drive through the palace grounds, making stops at Imperial Guard posts to exchange pleasantries with the guards, on the night before the coup was launched. The ailing Empress had been urged to visit the posts by security officials, who were concerned about the soldiers' morale, and perhaps had an idea that something was brewing. The appearance of the Empress with the Crown Prince at her side may have been used by coup leaders as an indication to their followers that the Empress might sympathise with a movement that brought her favored son to the throne. It is extremely unlikely that either the Empress or the Prince had any idea of what was being plotted. However, a cloud of suspicion never left the Crown Prince, and the Empress was deeply saddened by this.

Following her death in 1962, the Empress was buried in the crypt of Holy Trinity Cathedral in Addis Ababa among the tombs of her children. Prime Minister Aklilu Hapte-Wold delivered her eulogy paying tribute to her charity, her piety, and her role as advisor and helpmate to the Emperor, as well as her personal kindness and goodness. On the third day memorial and commemoration after the funeral, the Emperor himself paid tribute to his wife by saying that although the Prime Minister had aptly described what kind of person his late wife had been, he wanted to say that during their five decades of marriage, not once had it been necessary to have a third party mediate between him and his wife, and that their marriage had been one of peace and mutual support.

Later, the Emperor built a pair of grand sarcophagi in the north transept of Holy Trinity Cathedral's nave, in order to transfer his wife's remains there and eventually be buried at her side himself. But due to the revolution, the Emperor was not buried there after his death, and the Empress remained in her original tomb in the crypt. During the ceremonial burial of her husband's remains in November 2000, the remains of Empress Menen were also disinterred from the crypt tomb, and placed in the sarcophagus next to her husband in the nave of the Cathedral, as he had originally intended.

As the consort of Emperor Haile Selassie I, Empress Menen is highly venerated by members of the Rastafari movement. One name Rastas bestow on the Empress is "Queen Omega" which complements one of the names they give to the Emperor "King Alpha" (as in "Alpha and Omega"). The later name is used to refer to the emperor in the original version of the reggae song Rivers of Babylon by The Melodians but all mention of him was removed from the more popular version by Boney M.. 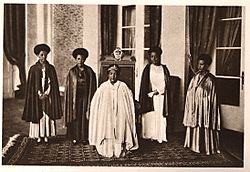 Empress Menen Asfaw seated in the centre and standing women from left to right are Princess Tsehai, Princess Tenagnework, and Princess Zenebework, her daughters, and on the far right is Princess Wolete Israel Seyoum, her daughter-in-law.

All content from Kiddle encyclopedia articles (including the article images and facts) can be freely used under Attribution-ShareAlike license, unless stated otherwise. Cite this article:
Menen Asfaw Facts for Kids. Kiddle Encyclopedia.