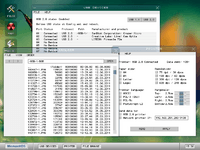 MenuetOS (also known as MeOS) is an operating system for architecture computers for x86 and x86-64 processors, by Ville Mikael Turjanmaa. It is a very small system, which can be run from a floppy disk. It is written in only assembly code, and works fast because of these differences and because it has less "code overhead". It is available in English, Russian, Czech, Serbian, and Chinese.

All content from Kiddle encyclopedia articles (including the article images and facts) can be freely used under Attribution-ShareAlike license, unless stated otherwise. Cite this article:
MenuetOS Facts for Kids. Kiddle Encyclopedia.