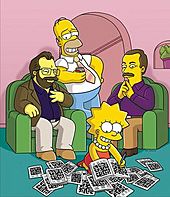 Reagle (left) as he appeared on The Simpsons.'

Merl Reagle (January 5, 1950 – August 22, 2015) was an American crossword constructor. He was best known for his family-friendly themes.

For 30 years, he constructed a puzzle every Sunday for the San Francisco Chronicle (originally the San Francisco Examiner), which he syndicated to more than 50 Sunday newspapers, including the Washington Post, the Los Angeles Times, the Philadelphia Inquirer, the Seattle Times, The Plain Dealer, the Hartford Courant, the New York Observer, and the Arizona Daily Star.

All content from Kiddle encyclopedia articles (including the article images and facts) can be freely used under Attribution-ShareAlike license, unless stated otherwise. Cite this article:
Merl Reagle Facts for Kids. Kiddle Encyclopedia.