The speedway is known as the oldest operating race track in Canada as it has been in continuous operation since it opened on July 1, 1952.

New ownership took over the track in 2017 and it will be celebrating its seventieth anniversary in 2021. 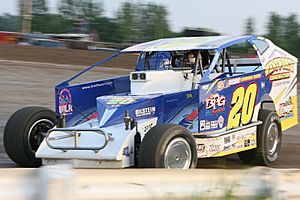 A dirt modified at Merrittville

All content from Kiddle encyclopedia articles (including the article images and facts) can be freely used under Attribution-ShareAlike license, unless stated otherwise. Cite this article:
Merrittville Speedway Facts for Kids. Kiddle Encyclopedia.