The Met Breuer ( BROY-ər) was a museum of modern and contemporary art at 945 Madison Avenue and East 75th Street in the Upper East Side of Manhattan, New York City. It served as a branch museum of the Metropolitan Museum of Art (known as the Met).

The Met Breuer opened in March 2016 in the building formerly occupied by the Whitney Museum of American Art, designed by Marcel Breuer and completed in 1966. Its works come from the Met's collection and are both monographic and thematic exhibitions.

In June 2020, it was announced that the museum would close permanently, never reopening after its closure in March 2020 due to the COVID-19 pandemic. Control of the building was transferred to the Frick Collection for its use during renovations to the Frick's main building, an arrangement which predated the COVID outbreak. 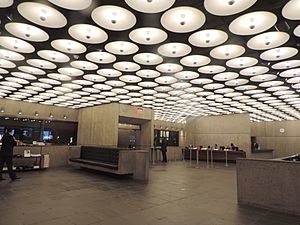 In 2008, the idea behind the Met Breuer project was initiated by philanthropist Leonard Lauder. An agreement between the Met and the Whitney was signed, after three years of negotiation, in 2011.

The location opened in March 2016 following a year and a half of preparations as part of a $600 million Metropolitan Museum of Art renovation plan. Architects Beyer Blinder Belle updated the Met Breuer building, which had been designed by Marcel Breuer. The Met will allocate an annual operating budget of $17 million to run the museum as part of an integrated expansion of the main museum's outreach, with a focus on modern art. The Met has an eight-year lease on the building from the Whitney Museum, with the option to renew another five and a half years, until approximately 2029.

The Met Breuer was overseen by Sheena Wagstaff, previously at the Tate Modern, who has been the head of the Modern and Contemporary Art Department of the Met since 2012. Director and CEO of the Met, Thomas P. Campbell, spearheaded the effort with a stated focus on the digital (moving from analog to digital) and focusing on accessibility and outreach. He considered the Met to be the largest encyclopedic museum in the world, with the Met Breuer an important part of that, especially as it works towards meaningfully engaging with a global audience, as well as the visitors who come to the museum in person. Both Campbell and Wagstaff saw the Met Breuer as a sculptural creation and artwork in its own right.

The opening featured a survey of Nasreen Mohamedi and "Unfinished: Thoughts Left Visible", an exhibit of incomplete works that ranged over 500 years, from Italian Renaissance to contemporary paintings. The exhibit notably featured Pablo Picasso's never-before-exhibited 1931 painting Woman in a Red Armchair as well as work by Kerry James Marshall, whose retrospective exhibition “Mastry” appeared at the Met Breuer in the autumn and winter of 2016–7.

In September 2018, it was announced that the Met intended to vacate the Met Breuer three years early, in 2020, with the Frick Collection temporarily occupying the space while its main building underwent renovations. Originally, the intention was that the Met would vacate the Met Breuer building in July following an exhibition of the works of Gerhard Richter. However, the onset of the COVID-19 pandemic forced the museum to close on March 13, just eight days after the Richter exhibit opened. In June 2020, it was announced that the Met Breuer would close permanently, with the Frick Collection occupying the building, as planned.

All content from Kiddle encyclopedia articles (including the article images and facts) can be freely used under Attribution-ShareAlike license, unless stated otherwise. Cite this article:
Met Breuer Facts for Kids. Kiddle Encyclopedia.