Metro Arts Theatre is a heritage-listed building, originally a warehouse and then a theatre, at 109-117 Edward Street, Brisbane City, Queensland, Australia. It was built in 1890. It has also been known as Community Arts Centre, Coronation House, and Metro Arts Centre. It was added to the Queensland Heritage Register on 21 October 1992.

The site was purchased in 1871 by Captain George Poynter Heath, who erected a warehouse in 1890 and leased it to George Myers & Co, who imported china, glass and earthenware products.

In March 1902 the upper levels were substantially damaged by fire but were later repaired.

The warehouse was subdivided in 1907 to accommodate other tenants. In 1912, Myers & Co purchased the building and became the sole occupants. The firm remained in the building until 1930 when it was forced into liquidation. Between 1931 and 1937 the building was vacant. In 1938 the building was renamed Coronation House in celebration of the coronation of George VI. It was occupied by various tenants including manufacturing agents and importers.

By the early 1970s the building was regarded as unsuitable for government offices and by 1976 all government departments had moved elsewhere. In that year, work began on converting the building into a community arts centre. In July 1981 the Community Arts Centre was officially opened, and contained theatre, two art galleries, rehearsal rooms, workshop spaces, meeting rooms, dark room, printing shop, cinema and restaurant. Further work was undertaken in 1988 to provide additional facilities for artists. The building was renamed the Metro Arts Centre in 1988.

From 1980 to mid-2020, the building at 109 Edward Street was a theatre, with Metro Arts operated as a multidisciplinary arts organisation. It contained two performance venues, the Sue Benner Theatre and the Studio, a gallery space and supported more than 30 creative businesses, individual artist studios and retail outlets.

The Metro Arts building was sold in December 2019, with Metro Arts relocated to within West Village at 111 Boundary Street, West End. The new location is set to officially open in September 2020. 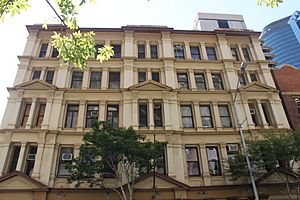 This is a five-storey brick building with a basement level. The internal structure consists of timber floors and columns. The street facade is divided into five bays by plain broad pilasters. The central and outside bays contain tall, narrow paired windows, while the wider intermediate bays contain three wider windows. All window openings are square-headed. The facade features austere classical detailing with string courses dividing the floor levels. 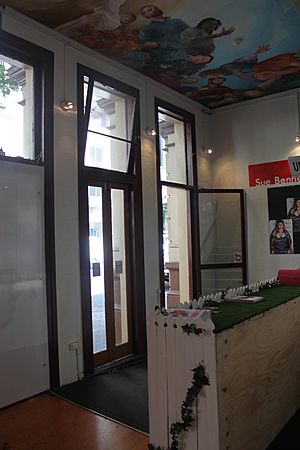 The ground floor level features, on the western side, a cart entrance and internal laneway which leads to a rear courtyard. The simple parapet has stepped sections above the central and outside bays. The sides of the building have no ornamentation but have a regular pattern of window openings. The rear of the building has an internal hoist and motor under a curved corrugated iron roof with hinged landings at each level.

The building is substantially intact, particularly the upper floors, with visible evidence of the timber columns and beams, timber flooring, brick walls and service hoist. Considerable settlement of the upper floors is evident. Alterations to the building include the removal of some floor structure and the insertion of partitioning to accommodate a cinema and cafeteria.

109 Edward Street was listed on the Queensland Heritage Register on 21 October 1992 having satisfied the following criteria.

The Metro Arts Centre is significant for the evidence it provides, along with other surviving nineteenth and early twentieth century warehouses, of the scale of the former warehousing area in that part of the city.

The Metro Arts Centre is significant as a good and rare example of a late Victorian warehouse.

The Metro Arts Centre is significant as a good and rare example of a late Victorian warehouse.

The building is also significant for its visual contribution to the character and continuity of the Edward Street streetscape.

All content from Kiddle encyclopedia articles (including the article images and facts) can be freely used under Attribution-ShareAlike license, unless stated otherwise. Cite this article:
Metro Arts Theatre Facts for Kids. Kiddle Encyclopedia.