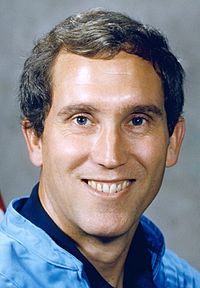 Michael John Smith (April 30, 1945 – January 28, 1986), was known as Mike Smith. He was an American astronaut. On 28 January 1986 he was the pilot of the Space Shuttle Challenger. He and his crew were killed when the Challenger exploded 73 seconds into its flight.

All content from Kiddle encyclopedia articles (including the article images and facts) can be freely used under Attribution-ShareAlike license, unless stated otherwise. Cite this article:
Michael John Smith Facts for Kids. Kiddle Encyclopedia.