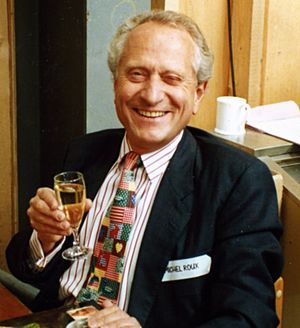 Michel Roux OBE (19 April 1941 – 11 March 2020), also known as Michel Roux Sr., was a French-born British chef and restaurateur. Along with his brother Albert, he opened Le Gavroche, later to become the first restaurant in Britain to have three Michelin stars. The brothers also opened The Waterside Inn, which was the first restaurant outside France to hold three stars for a period of 25 years.

The Roux brothers have been described as the "godfathers of modern restaurant cuisine in the UK." He founded the Roux Brothers Scholarship, along with Albert, in 1984. He worked as a consultant for companies such as British Airways and Celebrity Cruises. He was also a food writer and appeared on television shows such as Saturday Kitchen, MasterChef and The Roux Legacy.

Roux was born in Charolles, Saône-et-Loire. His son is chef Alain Roux. Chef Michel Roux Jr. is the son of his brother Albert.

On 11 March 2020, Roux died in Bray, Berkshire, at the age of 78. The cause of his death was idiopathic pulmonary fibrosis.

All content from Kiddle encyclopedia articles (including the article images and facts) can be freely used under Attribution-ShareAlike license, unless stated otherwise. Cite this article:
Michel Roux Facts for Kids. Kiddle Encyclopedia.