Michelle Caruso-Cabrera (born February 9, 1967) is an American politician and journalist. She was a regular CNBC contributor for two decades, including as co-host of Power Lunch and Worldwide Exchange. She unsuccessfully ran for the Democratic nomination for the 2021 New York City Comptroller election.

A registered member of the Republican Party through 2015, Caruso-Cabrera switched and registered as a Democrat in 2016. She moved to Queens in 2019 and challenged incumbent Representative Alexandria Ocasio-Cortez in the 2020 Democratic primary for New York's 14th congressional district, which covers portions of the Bronx and Queens. She received support from the Greater New York Chamber of Commerce for her candidacy, but was defeated in the primary after receiving 18.2% of the vote and coming in second, and came in third with 0.9% in the general election after becoming the candidate of the Serve America Movement.

Caruso-Cabrera was born in Dayton, Ohio and raised in Nashua, New Hampshire. Her grandparents were Italian and Cuban immigrants. She graduated from Nashua High School in 1987. She attended Wellesley College ('91) in Massachusetts, paying her tuition in part with the help of a National Merit Scholarship and her earnings from her first summer job as a waitress at Pizza Hut. She obtained a bachelor's degree in Economics. Prior to graduation, she was elected editor of the college newspaper, and starting in 1991 she worked as a stringer for The New York Times, reporting for the education section. 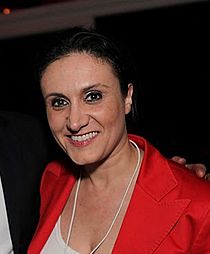 Caruso-Cabrera with Thomas Farley in 2018

Caruso-Cabrera was a researcher and later a special projects producer for Univision from 1991 to 1994, where she was a producer on a team that won an Emmy Award for a five-part series on children with AIDS. She then worked as a reporter for WTSP in St. Petersburg, Florida, from 1994 to 1998.

She joined CNBC in August 1998, working there until January 2019, and became the network's first Hispanic anchor in 2001. Caruso-Cabrera co-anchored Power Lunch with Bill Griffeth from 2002 to 2003. She received a Broadcast Journalist of the Year (2004) award from the National Association of Hispanic Journalists. She co-hosted the Worldwide Exchange program in 2005-07, along with Christine Tan in Asia and Ross Westgate in Europe. Caruso-Cabrera began appearing regularly on Power Lunch in 2009 in an analyst capacity. She was promoted to co-presenter of Power Lunch in 2009, and remained in that position until 2013. She rejoined Power Lunch for her third stint as co-presenter in 2016.

She left CNBC in September 2018 to join the board of directors of a Dallas, Texas, financial firm. Caruso-Cabrera held that position until February 2020.

In 2020, four years after switching away from the Republican Party, to become a registered Democrat, Caruso-Cabrera tweeted, "I support Medicare and social security-its important to take care of [sic] the most vulnerable. Medicare fo all is taking health insurance away from people who have health insurance that they already like."

As of 2007 she was married to Paulo Lima, and lived in Northern New Jersey. Caruso-Cabrera is now married to second husband Stephen Dizard, an investment banker and Republican Party donor who as of 2020 had donated over $400,000 to Republicans. The pair married in 2014. After living for several years in Trump International Hotel and Tower at Columbus Circle in Manhattan, in 2019 she moved with her husband to Sunnyside, Queens.

All content from Kiddle encyclopedia articles (including the article images and facts) can be freely used under Attribution-ShareAlike license, unless stated otherwise. Cite this article:
Michelle Caruso-Cabrera Facts for Kids. Kiddle Encyclopedia.