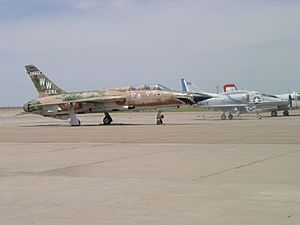 An external picture of the Mid-America Air Museum

The Mid-America Air Museum is an aerospace and aircraft museum located in Liberal, Kansas, at the Liberal Mid-America Regional Airport.

The Mid-American Air Museum is the largest aircraft museum in Kansas, and the fifth-largest in the United States. The museum has on display over 100 aircraft (both within the museum's primary building and on the adjacent tarmac), a gift store, and several displays of photographs and ephemera relating to the history of aviation in the region.

The Museum is on Liberal Mid-America Regional Airport, originally known as Liberal Army Air Field that served as a B-24 Liberator training base during the Second World War.

The Museum is located within a hangar that formerly belonged to Beech Aircraft (where Beech produced Beech Musketeer, Beechcraft Baron, and Beechcraft Duchess light airplanes, in the 1960s and 1970s.)

The museum started with the donation, by the late Colonel Tom Thomas, Jr., of his personal collection: over 50 aircraft (valued at over $3 Million) to the City of Liberal.

All content from Kiddle encyclopedia articles (including the article images and facts) can be freely used under Attribution-ShareAlike license, unless stated otherwise. Cite this article:
Mid-America Air Museum Facts for Kids. Kiddle Encyclopedia.