The Mildred Lane Kemper Art Museum is an art museum located on the campus of Washington University in St. Louis, within the university's Sam Fox School of Design & Visual Arts. It was founded in 1881 as the St. Louis School and Museum of Fine Arts, and initially located in a building in downtown St. Louis. It is the oldest art museum west of the Mississippi River. Its collection was formed in large part by acquiring significant works by artists of the time, a legacy that continues today. The Museum contains strong holdings of 19th-, 20th-, and 21st-century European and American paintings, sculptures, prints, installations, and photographs. The collection also includes some Egyptian and Greek antiquities, Old Master prints, and the Wulfing Collection of approximately 14,000 ancient Greek, Roman, and Byzantine coins.

The museum moved to its current home, designed by Pritzker Prize-winner Fumihiko Maki, in 2006.

In 2018 the museum was closed for renovation as part of a $360 million campus transformation program at Washington University in St. Louis. One year later it was reopened with a new 34-foot-tall polished stainless-steel facade, a sculpture garden, and a near 50 percent public display space increase.

The museum was established in 1881 as part of Washington University in St. Louis, under the name of the St. Louis School and Museum of Fine Arts. Halsey C. Ives served as the museums first director, and during his tenure, the collection focused on contemporary American artists, notably William Merritt Chase.

In 1905, St. Louis banker Charles Parsons donated his private collection to the museum; this donation included pieces by Frederic Edwin Church, and established the museum as a major holder of contemporary American art.

In 1906, the museum was relocated to the Palace of Fine Arts in Forest Park, where it was housed until 1909. In that year, the City Museum of Art was formed, and began to acquire works separately from the private university collection. The university collection would remain "on loan" to the public museum until 1960. 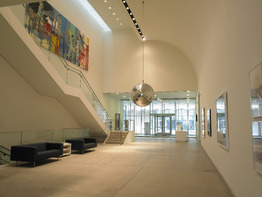 Olafur Eliasson's kinetic sculpture Your Imploded View (2001) is permanently on display in the foyer of the Mildred Lane Kemper Art Museum. The foyer's ceiling was specially reinforced to support the installation's weight.

In 1941, H.W. Janson joined the museum and began to focus on collecting contemporary European artwork, particularly examples of Cubism, Expressionism and Surrealism. In order to finance this project, he organized the sale of over 600 objects. Notable acquisitions during this period include works by Pablo Picasso, Max Ernst and Juan Gris. Janson also arranged for a permanent home for the museum's collection, and in 1960, the museum moved to Steinberg Hall, located on the main university campus. At this time, the museum was also renamed as the Washington University Gallery of Art.

Recently, the museum has continued to focus on the acquisition of contemporary works, including pieces by Jackson Pollock, Robert Rauschenberg and Jenny Holzer. In 2004, the museum was again renamed, this time as the Mildred Lane Kemper Art Museum, as a division of the new Sam Fox School of Visual Art and Design. Two years later, in 2006, the museum moved to a new building adjacent to the old Steinberg Hall. The 65,000-square-foot (6,000 m2) expansion was designed by Fumihiko Maki, and is also home to the Washington University Art and Architecture library and the department of Art History and Archaeology.

In May 2018, the museum was closed as part of a larger construction project at Washington University. The expansion, on the north side of the Kemper Art Museum, created a new facade composed of 30-foot-tall pleated stainless steel panels. It also included a redesigned entrance and a new 2,700-square-foot exhibition space named the James A. Kemper Gallery. The museum's Florence Steinberg-Weil Sculpture Garden was relocated to a setting north of the Sam Fox School's new Anabeth and John Weil Hall.

The Sam Fox School is dedicated to the creation, study, and exhibition of multidisciplinary and collaborative work with an emphasis on fostering creativity and intellectual exchange. 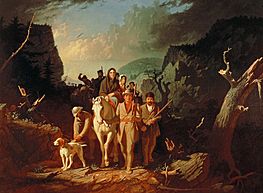 The Mildred Lane Kemper Art Museum has four exhibition spaces: the Barney A. Ebsworth Gallery, Garen Gallery, Bernoudy Permanent Collection Gallery, and teaching gallery. Some exhibitions include To See Without Being Seen: Contemporary Art and Drone Warfare, Rashid Johnson: Message to Our Folks, and Notations: Contemporary Drawing as Idea and Process.

The permanent collection of the museum, on the top floor, includes original works such as Daniel Boone Escorting Settlers through the Cumberland Gap, painted by George Caleb Bingham.

The Newman Money Museum opened October 25, 2006 on the bottom floor of the Mildred Lane Kemper Art Museum. The museum includes an exhibition space as well as a numismatics library and scholarly work space. The collection was donated by American numismatist Eric P. Newman and his wife Evelyn Newman, containing a broad array of coin and paper money, but primarily focusing on Colonial and early American money. The museum is curated by Tom Serfass and also features items documenting Benjamin Franklin's role as a figure of early American Colonial paper money. Exhibits have also focused on lasting influence of Spanish specie coinage, depiction of women and African-Americans on money, and creation and production of money including sketches, a collection of coin counters and changers, and rare examples of printing errors.

All content from Kiddle encyclopedia articles (including the article images and facts) can be freely used under Attribution-ShareAlike license, unless stated otherwise. Cite this article:
Mildred Lane Kemper Art Museum Facts for Kids. Kiddle Encyclopedia.