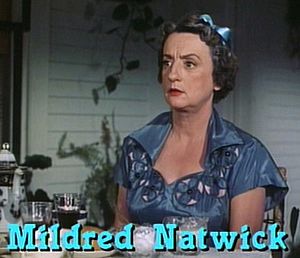 Natwick in the film The Trouble with Harry in 19

Mildred Natwick (June 19, 1905 – October 25, 1994) was an American stage and movie actress. She played the mother of actress Jane Fonda in the movie Barefoot in the Park. She acted in John Ford movies, including She Wore a Yellow Ribbon and 3 Godfathers, both of which got released in 1948. Her last role was in Dangerous Liaisons in 1988.

Natwick was born in Baltimore, Maryland. She died from cancer at age 89 in New York City.

All content from Kiddle encyclopedia articles (including the article images and facts) can be freely used under Attribution-ShareAlike license, unless stated otherwise. Cite this article:
Mildred Natwick Facts for Kids. Kiddle Encyclopedia.