The Military Working Dog Teams National Monument is a monument to military working dogs located at Joint Base San Antonio (JBSA)-Lackland in San Antonio, Texas. The monument represents handlers, dogs, and veterinary support, from all military service branches (Army, Marines, Navy, Air Force, and Coast Guard) that have made up the Military Working Dog program since World War II. The monument grounds include a 3,000 square feet granite plaza, granite pedestals, granite history wall, granite benches and water fountain. The granite pedestals have large bronze statues of dogs and handlers. The monument was dedicated on October 28, 2013.

The remaining sculptures are four of the more common breeds of Military Working Dogs utilized by the United States Department of Defense since World War II. They include a Doberman Pinscher, German Shepherd, Labrador Retriever, and Belgian Malinois.

Behind the granite wall are five flag poles, one for the five U.S. Armed Services which existed when the monument was built.

The "Not Forgotten Fountain" is a bronze sculpture depicting a Vietnam War dog handler pouring water from his canteen into a helmet. The sculpture represents a Vietnam era dog handler and his working dog. A significant feature is the dog’s paw resting on the thigh of his hander accentuating their bonding relationship. The water fountain idea was conceived by Burnam and sculpted by artist Paula Slater. The water fountain is fully functional so that a visiting dog may have a drink. The granite pedestal of the "Not Forgotten Fountain" reads "In everlasting memory of all the war dogs who served, died, and were left behind in the Vietnam War".

Over a span of nine years, the JBMF raised $2.1 million from corporate sponsors and public donations to fund the construction and maintenance of the national monument. Arrangements were made with the Department of Defense to accept the monument and have it installed in the southeast corner of the 37th Training Wing Basic Military Training Parade Field at Joint Base San Antonio-Lackland. This site was selected by the JBMF due to its historical significance as the training center and headquarters of the Department of Defense Military Working Dog Program since 1958.

Graphic artist and designer Brian Rich, was tasked to digitally illustrate renderings that would bring their visions to life while telling the story of military working dog teams. The final design creates a visual structure that incorporates the simplicity of the subjects but also details the complexity of military working dogs and their handler's lives on the battlefield. The monument is meant to embody the history of the war dog program from World War II to present-day War on Terror theaters with meaningful purpose and accurate historical representation. It included all four U.S. Armed Services (Army, Marines, Navy, Air Force) and the US Coast Guard. The materials selected to build the national monument were granite and silicone bronze, which could stand the test of weather and time with minimum maintenance for its outdoor location. The concept and design was presented and approved by the U.S. Department of Defense (DoD).

The Keith Monument Company procured the entire horde of granite from the Rock of Ages Granite Quarry, Graniteville, Vermont. The granite components were cut to specifications, shipped to JBSA-Lackland and installed on-site. Pieces of the granite were cut-out to allow for lighting. Those pieces were gifted by the JBMF to key contributors and members of the Dedication and Unveiling Ceremony.

Artist Jim Smith, Laser Imaging and Design, Inc., created the artistic impression of authentic photos of war dog teams in action scenes since World War II. Authentic photos from World War II to the War on Terror was acquired from public records at the National Archives in Washington DC. The black granite panels were seamlessly mounted on the large gray granite wall.

The four large bronze dog sculptures and the 9 foot bronze military dog handler were crafted by artist and bronze sculptor Paula Slater, M.A.. which were based on the initial creative design.

The bronze and granite fully functional "Not Forgotten Fountain" was conceived by John C. Burnam and sketched and sculpted by Artist, Paula B. Slater, M.A. 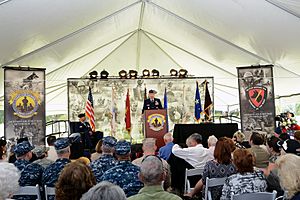 The Military Working Dog Teams National Monument was unveiled during a formal dedication ceremony with full military fanfare on October 28, 2013. The event was covered by many local and national news organizations and was open to the American public. The ceremony was organized by the JBMF along with the assistance and under the direction of Lt Col Harris, 341st Training Squadron (TRS) Commander and TSgt Christopher Dion, 341st TRS Military Working Dog Handler Course Team Chief and representative to the JBMF. Speakers included its founder and author, John C. Burnam, retired USMC Handler Ron Aeillo, President US War Dogs Association, USAF Wounded Warrior and K9 Handler cast member of the movie "Glory Hounds", TSgt Leonard Anderson, and , USMC Handler and author of Sergeant Rex, SGT Mike Dowling.

The Military Working Dog Teams National Monument is located on a secure United States Air Force Installation. However, Public Law 110-181 requires the Department of Defense to provide reasonable access to the monument by visitors and their dogs. Therefore, members of the public (and their dogs) who wish to visit the Military Working Dog Teams National Monument can access the installation to see the monument by requesting a base pass at the Lackland Air Force Base visitor control centers. The pass is limited to four hours of base access and can only be used to visit the monument. All those requesting access should know that they will be vetted for security purposes.

In 2014 responsibility for the care, upkeep, and promotion of the national monument was officially transferred by the John Burnam Monument Foundation to the Airmen Heritage Foundation.

All content from Kiddle encyclopedia articles (including the article images and facts) can be freely used under Attribution-ShareAlike license, unless stated otherwise. Cite this article:
Military Working Dog Teams National Monument Facts for Kids. Kiddle Encyclopedia.