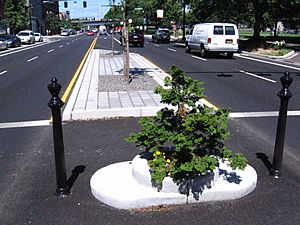 Mill Ends Park, the smallest park in the world, summer 2007

Mill Ends Park (sometimes called Mill's End Park) is a small urban park. It is located in the median strip of SW Naito Parkway, approaching esplanade along the Willamentte Rivera near SW Taylor Street in downtown Portland, Oregon, United States. The park is a small circle 2 ft (0.61 m) across. It has a total area of 452 sq in (0.292 m2). It is the smallest park in the world. This fact was included in the Guinness Book of Records in 1971. 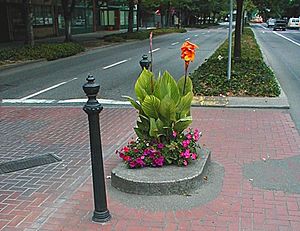 The park in summer 2004 (before remodeling)

The park was dedicated on St. Patrick's Day 1948, as "the only leprechaun colony west of Ireland". It was created by Dick Fagan. In 1948 the site that would become Mill Ends Park was supposed to be the site for a light pole. The pole did not work and weeds began to grow. Fagan, writer for the Oregon Journal, planted flowers in the hole. He named it "Mill Ends", after his column. Fagan died of cancer in 1968. It was named the official city park in 1976. The small circle has featured many unusual items since its creation. These include, a swimming pool for butterflies (complete with a diving board), a horseshoe, a piece of the Oregon Journal building, and a small Ferris wheel.

On St. Patrick's Day, 2001, the park was decorated with leprechauns. The park continues to be the site of St. Patrick's Day festivities. The events held there include concerts by Clan Macleay Pipe Band, picnics, and rose plantings by the Junior Rose Festival Court. In March 2013, the park's tree was stolen. Law enforcement planted a replacement tree. The next day, a passerby found the original tree lying next to the new one.

All content from Kiddle encyclopedia articles (including the article images and facts) can be freely used under Attribution-ShareAlike license, unless stated otherwise. Cite this article:
Mill Ends Park Facts for Kids. Kiddle Encyclopedia.