The Million Dollar Theatre at 307 S. Broadway in Downtown Los Angeles is one of the first movie palaces built in the United States. It opened in 1917 with the premiere of William S. Hart's The Silent Man. It's the northernmost of the collection of historical movie palaces in the Broadway Theater District and stands directly across from the landmark Bradbury Building. The theater is listed in the National Register of Historic Places.

The Million Dollar was the first movie house built by entrepreneur Sid Grauman in 1918 as the first grand cinema palace in L.A. Grauman was later responsible for Grauman's Egyptian Theatre and Grauman's Chinese Theatre, both on Hollywood Boulevard, and was partly responsible for the entertainment district shifting from downtown Los Angeles to Hollywood in the mid-1920s.

For many years, the office building housed the headquarters of the Metropolitan Water District of Southern California. 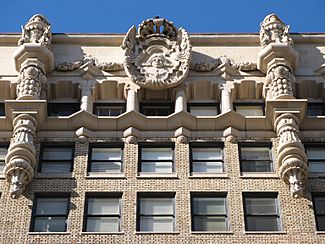 The facade at the top of the building

In the '40s, the theater was the second-run house of the famous Orpheum Circuit. Acts such as the Nat King Cole Trio, and Joe Liggins and The Honey Drippers performed on its stage. In 1949, the Million Dollar was taken over by Frank Fouce, a local Spanish-language theater owner and film distributor. The Million Dollar Theater became the mecca of Spanish-language entertainment in the United States. Dolores del Río, Cantinflas, María Félix, Agustín Lara, José Alfredo Jiménez, José Feliciano, Juan Gabriel, Vicente Fernández, and Celia Cruz are but a few of the artists that worked for Empresa Fouce. It was also the first venue where the late Mexican film star Antonio Aguilar worked with his rodeo horses on stage. This is where it is said he conceived the idea for his large arena rodeo productions.

In the late 1950s and early 1960s, Fouce went on to found Spanish International Communications Corp., named after his Spanish International Theater Company (which included the Million Dollar and the Mayan Theater, also located in Downtown Los Angeles). This company comprised the first group of Spanish-language and UHF television stations in the U.S.; KMEX Channel 34 in Los Angeles (and, indirectly, the Univision television network) can trace its roots to the Million Dollar Theatre. The Million Dollar and the Fouce family were pioneers in the then-unheard-of Spanish entertainment industry.

For their efforts, Fouce was awarded El Aguila Azteca (Order of the Aztec Eagle), Mexico's highest civilian award, by President Miguel Alemán Valdés. The theater and Fouce were also honored by the Mexican actors' union ANDA for their contributions to the Mexican film, recording, and entertainment industries. In addition to its successful stage productions, the theater was also the most prominent Spanish-language cinema in the United States. Every major Mexican motion picture premiered at the Million Dollar.

Gonzalo L. Checa, president of the Spanish division of the Metropolitan Theater Corporation, was responsible for the upsurge of attendance at the Million Dollar in the '70s and '80s due to his great expertise and keen insight of the entertainment needs of the Hispanic community. During this golden heyday, the long lines of people waiting to attend the Million Dollar would wrap around the block and cause the Los Angeles Police Department to close down Broadway to traffic. 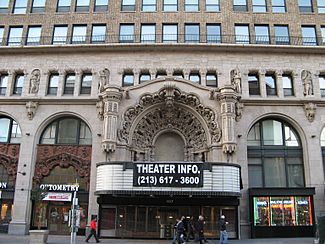 Ira Yellin (then the owner of Grand Central Market) acquired the building in 1989.

After serving as the home of a Spanish-language church for some years, as of 2006, the Million Dollar Theatre was empty, although the office building had been recently renovated and converted to residential space. In February 2008, the theater reopened, once again showing live Spanish theatre. It closed again in 2012. In 2017, the building was sold to Langdon Street Capital, and the theater and retail space were leased to fashion startup CoBird.

The theatre is home to special movie screenings that feature historic theatres in the Broadway district of DTLA. The series features classic films in a historical setting.

All content from Kiddle encyclopedia articles (including the article images and facts) can be freely used under Attribution-ShareAlike license, unless stated otherwise. Cite this article:
Million Dollar Theater Facts for Kids. Kiddle Encyclopedia.