Milton is an unincorporated community and census-designated place in Lafayette Parish, Louisiana, United States. At the 2010 U.S. census it had a population of 3,030; at the 2019 American Community Survey, it had an estimated population of 2,299. Milton is part of the Lafayette metropolitan statistical area.

It is unknown when the village of Milton was first settled. Old land claims show that much of the town is on land once owned by Bernard, son of Ashnoya, a chief of the Attakapas Indians. The area served as a river crossing and a trade center for the farms and cattle ranches that lined both sides of the Vermilion River.

The earliest settlers were Acadian families. Early Acadian landowners in the area included Francois Broussard, son of Joseph Broussard dit Beausoleil; Jean Bernard; Pierre Vincent; Michel Meaux; Jean-Baptiste Trahan; and Joseph Boudreaux. Jean-Jacques Denais operated a ferry at the townsite in the early 19th century. Désiré Broussard and Jean-Baptiste Montet settled there by 1823. Anselm Thibodeaux, who settled on land on the east bank of the river, cultivated it for at least 20 years prior to the Louisiana Purchase in 1803. Anselm's Coulee, named for him, runs through the area. 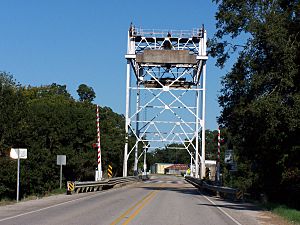 Beausoleil Broussard's descendants Eloi Broussard and Darmas Broussard owned and operated a store during the steamboat era. They built a two-story home on the east side of the river in the late 1880s. The home stands at a bridge there today. A ferry operated at the Milton site probably as early as 1820. At the December 14, 1897, meeting of the Vermilion Parish Police Jury, it was suggested that a bridge be built across the river there. That bridge was dedicated on February 2, 1902. The present bridge was built in 1948.

In 1885, Dr. Milton R. Cushman came to the area to practice medicine. Dr. Cushman petitioned for a post office at the Desire Broussard place and became the first postmaster there. The mail was left at his medical office. When postal officials asked for a name for the locale, Dr. Cushman's wife decided upon Milton—the name of her husband and son, Milton S. Cushman, who was born in 1890.

Milton is part of the Lafayette Parish School System.

All content from Kiddle encyclopedia articles (including the article images and facts) can be freely used under Attribution-ShareAlike license, unless stated otherwise. Cite this article:
Milton, Louisiana Facts for Kids. Kiddle Encyclopedia.