As of 2010, the 7,042 people populating the borough were 88.4% White, 4.5% African American, and 6.2% Hispanic. The community has a growing Puerto Rican population. The Hispanic population has tripled since the 2000 census. 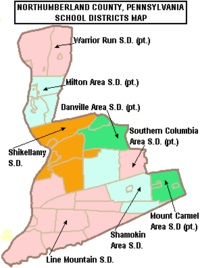 The local public school system, Milton Area School District, serves just over 2300 students. Enrollment is projected by the Pennsylvania Department of Education to increase significantly over the next 10 years. In 2005, Standard & Poors reported the district's student to teacher ratio was 13.9 to 1.

In 2007, the Pittsburgh Business Times ranked the district 356th out of 500 Pennsylvania school districts based on three years of Pennsylvania System of Student Assessment test scores.

By law, the local public school must provide transportation to schools within 10 mi (16 km) of the borders of the school district at no charge to the student.

Several alternative schools, including parochial and charter, are available in the region.

All content from Kiddle encyclopedia articles (including the article images and facts) can be freely used under Attribution-ShareAlike license, unless stated otherwise. Cite this article:
Milton, Pennsylvania Facts for Kids. Kiddle Encyclopedia.