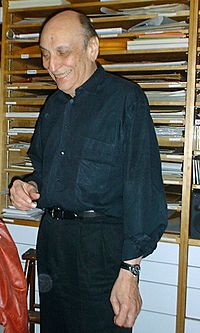 Milton Glaser (June 26, 1929 – June 26, 2020) was an American graphic designer. His designs include the I ❤ NY logo, the psychedelic Bob Dylan poster, and the logos for DC Comics and Brooklyn Brewery. He was born in New York City.

In 1954, he co-founded New York magazine with Clay Felker. He was honored with the National Medal of the Arts award from President Barack Obama in 2009.

Glaser died of a stroke and renal failure in New York City on his 91st birthday on June 26, 2020.

All content from Kiddle encyclopedia articles (including the article images and facts) can be freely used under Attribution-ShareAlike license, unless stated otherwise. Cite this article:
Milton Glaser Facts for Kids. Kiddle Encyclopedia.