Miracle Mile is a neighborhood in the city of Los Angeles, California. 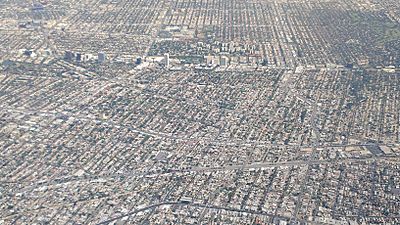 The Miracle Mile District is bordered by the Fairfax District on the north, Hancock Park on the northeast, West Los Angeles (Carthay Square, Little Ethiopia, South Carthay, and Wilshire Vista) on the south and southwest, and Carthay Circle on the west. The district's boundaries are roughly 3rd Street on the north, Highland Avenue on the east, San Vicente Boulevard on the south, and Fairfax Avenue on the west. Major thoroughfares include Wilshire and Olympic Boulevards, La Brea and Fairfax Avenues, and 6th Street. The district's ZIP codes are 90036 and parts of 90019. 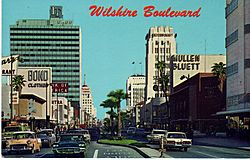 The Miracle Mile district during the early 1960s

In the early 1920s, Wilshire Boulevard west of Western Avenue was an unpaved farm road, extending through dairy farms and bean fields. Developer A. W. Ross saw potential for the area and developed Wilshire as a commercial district to rival downtown Los Angeles.

The Miracle Mile development was initially anchored by the May Company Department Store with its landmark 1939 Streamline Moderne building on the west and the E. Clem Wilson Building on the east, then Los Angeles's tallest commercial building. The Wilson Building had a dirigible mast on top and was home to a number of businesses and professionals relocating from downtown. The success of the new alternative commercial and shopping district negatively affected downtown real estate values and triggered development of the multiple downtowns which characterize contemporary Los Angeles.

Ross's insight was that the form and scale of his Wilshire strip should attract and serve automobile traffic rather than pedestrian shoppers. He applied this design both to the street itself and to the buildings lining it. Ross gave Wilshire various "firsts," including dedicated left-turn lanes and timed traffic lights, the first in the United States. He also required merchants to provide automobile parking lots, all to aid traffic flow. Major retailers such as Desmond's, Silverwood's, May Co., Coulter's, Mullen & Bluett, Myer Siegel, and Seibu eventually spread down Wilshire Boulevard from Fairfax to La Brea. Ross ordered that all building facades along Wilshire be engineered so as to be best seen through a windshield. This meant larger, bolder, simpler signage and longer buildings in a larger scale. They also had to be oriented toward the boulevard and architectural ornamentation and massing must be perceptible at 30 MPH (50 km/h) instead of at walking speed. These building forms were driven by practical requirements but contributed to the stylistic language of Art Deco and Streamline Moderne. 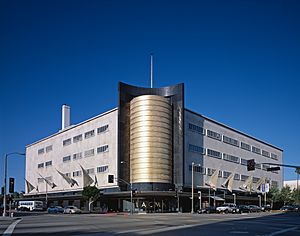 The 1939 Streamline Moderne May Company Building marks the western border of the Miracle Mile and "Museum Row".

Ross's moves were unprecedented, a huge commercial success, and proved historically influential. Ross had invented the car-oriented urban form — what Reyner Banham called "the linear downtown" model later adopted across the United States. The moves also contributed to Los Angeles's reputation as a city dominated by the car. A sculptural bust of Ross stands at 5800 Wilshire, with the inscription, "A. W. Ross, founder and developer of the Miracle Mile. Vision to see, wisdom to know, courage to do."

As wealth and newcomers poured into the fast-growing city, Ross's parcel became one of Los Angeles's most desirable areas. Acclaimed as "America's Champs-Élysées," this stretch of Wilshire near the La Brea Tar Pits was named "Miracle Mile" for its improbable rise to prominence. Although the preponderance of shopping malls and the development in the 1960s of financial and business districts in downtown and Century City lessened the Miracle Mile's importance as a retail and business center, the area has retained its vitality thanks to the addition of several museums and commercial high-rises.

An Art Deco style bank at 5209 Wilshire was built in 1929, and joined a select other Miracle Mile buildings when listed on the National Register of Historic Places. It was designed by the architecture firm of Morgan, Walls & Clements, which also designed the Wiltern Theatre, the El Capitan Theatre, and other notable buildings in Los Angeles.

Note: According to historian David Leighton, of the Arizona Daily Star newspaper the Miracle Mile in Tucson, Arizona derives its name from Los Angeles' Miracle Mile.

The Los Angeles County Museum of Art (LACMA), Petersen Automotive Museum, A+D Museum, Craft and Folk Art Museum, George C. Page Museum, and La Brea Tar Pits pavilions, among others, create "Museum Row" on the Miracle Mile. The Academy Museum of Motion Pictures for the Academy of Motion Picture Arts and Sciences (Oscars), designed by Renzo Piano, will be in the Wilshire May Company building and a new contemporary structure for theaters. 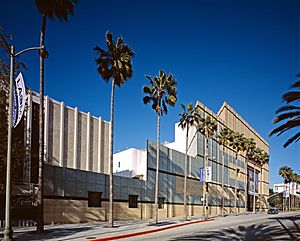 The Miracle Mile District is one of the city's more densely populated areas, but is considerably more affluent than other high-density neighborhoods like Westlake and Koreatown. As a result, traffic congestion in the district is high even by the standards of Los Angeles. To alleviate problems and provide an alternative to automobiles for commuters, proposals have been made to extend Los Angeles Metro's Purple Line subway to Fairfax Avenue or points further west, from its current terminus at Western Avenue in Koreatown. However, a federal ban on tunneling operations in the area was passed at the behest of the district's Congressional representative Henry Waxman after a 1985 explosion, caused by the buildup of methane seeping up through the district's long-depleted oil wells, destroyed a department store. The ban was implemented despite the fact that methane deposits abound in most of Los Angeles. In late 2005, the ban was overturned, owing to tunneling techniques that make it possible to mitigate the methane concern. A westerly extension of the subway has recently been supported by many civic officials in Los Angeles, Beverly Hills, and Santa Monica, and will take anywhere from 5 to 10 years to complete.

The area is within the Los Angeles Unified School District, Board District 4.

The Miracle Mile district is one of the city's more densely populated areas. To alleviate problems and provide an alternative to automobiles for commuters, Los Angeles Metro's D Line subway is being extended along Wilshire Boulevard to the Veterans Affairs Hospital, from its current terminus at Western Avenue in Koreatown. However, a federal ban on tunneling operations in the area was passed at the behest of the district's congressional representative Henry Waxman after a 1985 explosion, caused by the buildup of methane seeping up through the district's long-depleted oil wells, destroyed a department store. The ban was implemented despite the fact that methane deposits abound in most of Los Angeles. In late 2005, the ban was overturned, owing to tunneling techniques that make it possible to mitigate the methane concern. A westerly extension of the subway was then supported by many civic officials in Los Angeles, Beverly Hills, and Santa Monica, the three cities through which the extension may run. In early 2008, the project—which is destined to terminate in Santa Monica—received $5 billion in federal funds. In late 2008, Measure R passed releasing $10 billion in reserve funds to start working on all public transit projects in the city of L.A. as well as the most desired "Subway to the sea" project, which will run from downtown L.A. to Santa Monica. This ambitious project was proposed over ten years ago and will take anywhere from 5 to 10 years to complete. Ongoing construction work on the Fairfax and Wilshire Station is expected by MTA to be completed by 2023.

All content from Kiddle encyclopedia articles (including the article images and facts) can be freely used under Attribution-ShareAlike license, unless stated otherwise. Cite this article:
Miracle Mile, Los Angeles Facts for Kids. Kiddle Encyclopedia.