Miss Spider's Sunny Patch Friends, sometimes shortened to Sunny Patch, is a Canadian-British children's television series based on the children's books by David Kirk. The series originally aired on Teletoon (and later Treehouse TV) in Canada and Channel 5 in the United Kingdom. It was produced by Callaway Arts & Entertainment. A total of three seasons of 44 episodes were produced.

The series is set in "Sunny Patch" (a miniature town made of common forest items), populated by anthropomorphic bugs, and primarily centers around the Spider family. The episodes follow the children's adventures playing in Sunny Patch and learning life lessons, such as being kind to others, being imaginative, having responsibility, and being curious about the world around them. 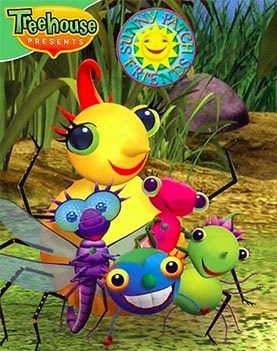 All content from Kiddle encyclopedia articles (including the article images and facts) can be freely used under Attribution-ShareAlike license, unless stated otherwise. Cite this article:
Miss Spider's Sunny Patch Friends Facts for Kids. Kiddle Encyclopedia.