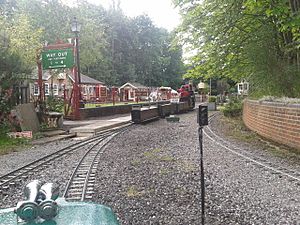 Mizens Railway is a 7¼ inch gauge miniature railway located in a 10-acre site near Woking in Surrey, England. The railway comprises three routes, the longest being nearly 1 mile long. A variety of locomotives are in use, including several steam engines.

The railway – named after its original location at Mizens Farm, now the headquarters of McLaren until moving to the present site in 2000 – opens to the public most Sunday afternoons from May to September, and on other special events.

Three routes are operated by the railway on public running days, The Suburban, the Miler and the Highlander. A maximum of two of these routes can be operated at one time for the public. Tickets are bought for each route separately but a ticket can be bought that includes a ride on both routes that are operational on each running day.

The suburban route is the shortest route. It is run on almost all running days, usually in combination with either the Miler or Suburban route. On special events it is not uncommon to only operate the suburban route, as it has the greatest capacity.

The Miler route traverses roughly a mile some of which is part of the suburban route, the train departs from platform 3 in the opposite direction to the Suburban. The train arrives at Bonsey Lane and then reverses along the line into platform 3.

The Highlander saw its testing in mid-2014 with limited passenger runs. Technical difficulties prohibited opening in 2014 with final testing occurring in early 2015 before the start of the running season. Due to the demanding gradients of this route, it is only opened to the public in dry conditions and depending on the availability of locomotives and coaching stock. Trains on this route start and end their journey at platform 3.

The railway has many facilities for its visitors, these include the Station Building with a small kitchen, small shop, a picnic area, a ticket office and a footbridge over the railway so visitors can view the trains from above.

The railway hold special events throughout the year advertised via posters, social media and its website including '1940's Day', 'Teddy Bears Picnic' (August Only) and the very popular 'Santa Specials' . Pre-booked tickets apply to Santa's specials held over the three Sundays in December before Christmas Day where the train stops at Santa's halt for the passengers to have the chance to meet Santa and his Elves and are given a gift from Santa.

The railway is controlled by a variety of signals. Many signals on the main line are controlled automatically but most signals around the train station are controlled from the south signal box. The north signal box is being installed to control the new 'Highland' route. Construction of the north signal box and its signals are nearing completion and is hoped to be in service in the 2015 train running season. Both of the signal boxes contain 20 half size levers, supported by buttons for some of the shunt signals. Both the north and south signal boxes are controlled with 20 half-size levers and a variety of buttons to operate shunt signals. Basic electronic interlocking is in use where appropriate. All of the automatic signals on the track are 2 or 3 aspect color light signals which operate using track circuit equipment. Many of the signals in the station are of a LMS semaphore type, and are built near to scale.

The site contains several larger items of railway rolling stock on static display. The largest of these is the British Rail Class 423 (also known as 4-VEP) driving trailer unit number 76887 from unit 3568. A platform and protective roof have been constructed over the coach to protect it from the rain. Also on site is an LNER tender which is owned by and being restored by the 61662 Manchester United appeal. At the gate of the site a South African Class A 4-8-2T tank stands on a short section of track. The locomotive moved to the Woking site in 2011 by ship from Richard Bay in South Africa to Bristol Portbury Docks, and then by road transport to Woking.

Mizens railway has a variety of locomotives to drive the trains. These are powered by a variety of steam, petrol and battery electric power and can be seen on the front of the trains. On some days locomotives visit the railway, this mainly happens on the special event "The visiting locos day". The railway owns one locomotive, Bourne Again, a large sit-in petrol locomotive. Most of the other Locomotives are owned by members of the Railway and are also used on a regular basis.

A large number of resident locos at Mizens are powered by diesel engines and electric motors. On most running days there are more diesel and electric locos in operation.

All content from Kiddle encyclopedia articles (including the article images and facts) can be freely used under Attribution-ShareAlike license, unless stated otherwise. Cite this article:
Mizens Railway Facts for Kids. Kiddle Encyclopedia.