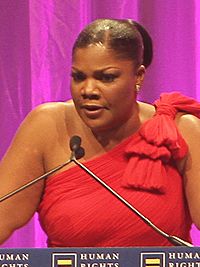 Monique Angela Hicks (née Imes; born December 11, 1967), known professionally as Mo'Nique, is an American comedian and actress. She was born in Glen Burnie, Maryland. She is known for her role as Nicole "Nikki" Parker in the UPN series The Parkers from 1999 to 2004 and as Mary Lee Johnston in Precious, for which she won the Academy Award for Best Supporting Actress. In 2002, she won a Grammy Award.

All content from Kiddle encyclopedia articles (including the article images and facts) can be freely used under Attribution-ShareAlike license, unless stated otherwise. Cite this article:
Mo'Nique Facts for Kids. Kiddle Encyclopedia.