Momence is a city in Kankakee County, Illinois, United States. The population was 3,171 at the 2000 census, and 3,310 in 2010. It is part of the Kankakee–Bradley Metropolitan Statistical Area.

First known as "Lower Crossing", Momence was named after a local Potawatomi, Isadore Moness. Momence was first platted by Dr. Hiram Todd in 1846. It is located on the Kankakee River. 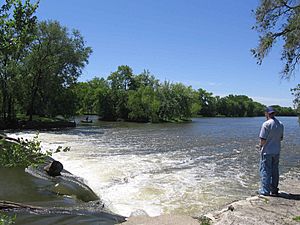 Fishing on the Kankakee River at Momence.

All content from Kiddle encyclopedia articles (including the article images and facts) can be freely used under Attribution-ShareAlike license, unless stated otherwise. Cite this article:
Momence, Illinois Facts for Kids. Kiddle Encyclopedia.