Moncreiffe Island, also known as Friarton Island, is an island in Perth, Scotland. It divides the River Tay into two channels as it flows through Perth, and is crossed by the railway line to Dundee. 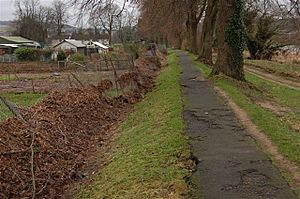 The King James VI Golf Course is situated on and covers much of the island with the remaining land used for allotments.

At the 2011 census, it is the only permanently inhabited freshwater island in Scotland which is not on Loch Lomond.

All content from Kiddle encyclopedia articles (including the article images and facts) can be freely used under Attribution-ShareAlike license, unless stated otherwise. Cite this article:
Moncreiffe Island Facts for Kids. Kiddle Encyclopedia.