Mont-Tremblant is a city in the Laurentian Mountains of Quebec, Canada, approximately 130 kilometres (81 mi) northwest of Montreal and 140 kilometres (87 mi) northeast of Ottawa, Ontario. The current municipality with city status was formed in 2000. Mont-Tremblant is most famous for its ski resort, the Mont-Tremblant Ski Resort, which is seven kilometres from the village proper, at the foot of a mountain called Mont Tremblant (derived from local Algonquins who referred to it as the "trembling mountain").

Since the summer of 2006, Mont-Tremblant has its own senior amateur Canadian football team, the Mystral, and Junior AA ice hockey team, Les Diables (Devils). 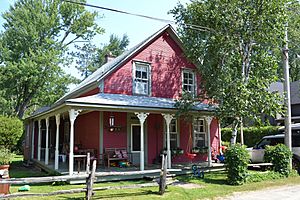 House in the historic Mont-Tremblant village

The area was inhabited by Algonquins before European colonization. It was settled in 1872 by parish priest Antoine Labelle, leading to formal establishment of the parish in 1879. A railway line from Montreal was completed to the village of Saint-Jovite in 1892, and extended to Lac Mercier in 1904. Mont-Tremblant developed around the Lac-Mercier station. In 1905 a hydroelectric dam was erected on the banks of the Ruisseau Clair (Clear River) and the Rivière-du-Diable (Devil's River) providing electricity initially for Saint-Jovite. Principal economic activities were agriculture and logging.

Constructed by Joseph Bondurant Ryan, the ski resort Mont-Tremblant Lodge began operation of their first chair lift in 1939. His family sold the resort in 1965 to a consortium of investors. 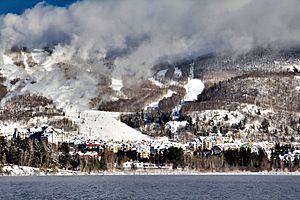 The city has five elementary schools on its territory, one high school, one professional training school, and one public college.

All content from Kiddle encyclopedia articles (including the article images and facts) can be freely used under Attribution-ShareAlike license, unless stated otherwise. Cite this article:
Mont-Tremblant Facts for Kids. Kiddle Encyclopedia.