Mont Tremblant Ski Resort (commonly referred to as Tremblant) is a year-round resort in the Laurentian Mountains of Quebec, Canada, located about 130 km (80 mi) northwest of Montreal. It is best known as a ski destination, but also features Lake Tremblant suitable for swimming and two golf courses in the summer months. The name of the mountain, Mont Tremblant, was derived from the Algonquin indigenous people, who called it the "trembling mountain." The summit is at an elevation of 875 m (2,871 ft), which makes it one of the tallest peaks in the Laurentians. One km north of the principal down hill area is the Edge, an area of glade skiing and 2.8 km north of that is the true summit, Pic Johanssen 932 m, which has a trail over the top and is Black Diamond for skiers and boarders. The resort is owned by Alterra Mountain Company.

Joseph Bondurant Ryan, an explorer from a wealthy American family from Philadelphia, came to the region prospecting gold in 1938. Accompanied by Harry Wheeler (founder of the Gray Rocks Inn in Mont Tremblant) and Lowell Thomas, an American journalist, they climbed to the summit of Mont Tremblant with skis wrapped in seal skins for traction. After an exhausting trek to the summit, it is said that Joseph Ryan vowed to transform the landscape into a world-class alpine village. Only one year later, his dream was realized. On February 12, 1939, Joseph Ryan opened the Mont Tremblant Lodge, which remains part of the pedestrian village today.

In its early years, Lowell Thomas, the American radio broadcaster, was an avid skier who helped popularize the resort by broadcasting shows from the site, thereby establishing the resort as a prime destination for skiers. The resort named a triple ski lift, which is located on the north mountainside, and trails after him as well as other early devotees.

Following the sudden death of Joseph Bondurant Ryan in 1950, the Mont Tremblant ski resort was operated by his wife Mary Rutherfoord Johnson Ryan until 1965, when it was sold to local Quebec entrepreneurs led by André Charron. They ran the resort until 1979, when they sold it to La Société des Caisses d'Entraide Économique. They ran the resort for four years until it went into bankruptcy. The resort was then bought in 1983 by Louis-Pierre Lapointe, who in turn sold it in 1991 to Intrawest.

Intrawest immediately expanded the pedestrian resort village with architecture reminiscent of traditional Quebec and built new ski lifts, including a gondola. Other changes included building the Grand Manitou summit lodge. In 2009, a casino located at the base of the Soleil trails was opened. The casino is serviced by an 8-passenger gondola that runs from the main resort to the casino.

Joseph Bondurant Ryan is buried next to the St. Bernard Chapel that he built in 1940-41 at the base of the alpine village, along with his wife Mary and son Peter Ryan, who died in Paris in 1962 at the age of 22 as a result of an auto racing accident. Peter Ryan was an accomplished champion skier who had been named to the Canadian Olympic ski team, but he had switched to auto racing after a 1959 skiing accident. He quickly showed tremendous talent in auto racing, and he was the first Canadian in Formula One racing and the winner of the first Canadian Grand Prix held at Mosport in 1961.

On March 16, 2009, actress Natasha Richardson sustained a head injury when she fell while taking a beginner skiing lesson at the resort. She died two days later in New York City.

Since Alterra took ownership of the resort in 2018, the resort has seen some major investments. During the summer of 2018, the Manitou Chalet located at the top of the mountain received significant improvements. For the winter of 2018-2019, a new high-speed quad ski lift was installed to replace the old Lowell Thomas Lift. The total number of trails is now 102, with several new glade areas. Alterra has already announced another $14 million investment for the 2019-2020 season. New developments will also be taking place on the Soleil Side, including a new hotel. 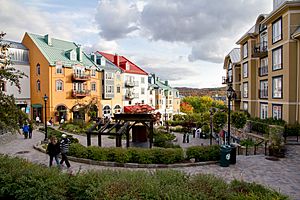 The resort is located within Mont-Tremblant National Park, a Quebec provincial park in the Laurentian Mountains. The top of the mountain has a chalet and cafeteria, Le Grand Manitou, open winter and summer.

An open-air gondola called the Cabriolet connects the upper and lower parts of the pedestrian village. From the top of this lift, the main gondola is available to take skiers to the summit of the mountain. There is also a ski trail running through the village for skiers to access the lower level of the village and transportation.

The Mont Tremblant Resort also has extensive shopping for ski and snowboard enthusiasts. The municipal village of Mont-Tremblant is 5 km (3.1 mi) distant. 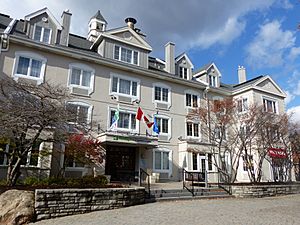 A Holiday Inn Express at the pedestrian village

Most condo accommodations at the resort area are privately owned. The resort or rental agencies act as a rental broker for these properties by handling maintenance, reservations and other guest-related tasks on behalf of owners. There are also many privately owned chalets of all levels (from budget to luxury) in the immediate area.

Mont Tremblant has year-round activities which take advantage of the surrounding environment (mountains, forest, lakes and rivers); most are set up on daily schedules and usually take the form of tours in small groups and are accessible to families; most are run by independent operators or specialized guides. 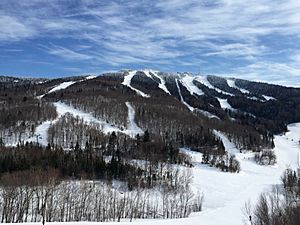 View of the ski and snowboarding runs from the south face

The main resort has more than 600 acres (2.4 km2) of ski and snowboarding trails in four distinct areas: North Side (Versant Nord), South Side (Versant Sud), Sunny Side (Versant Soleil) and The Edge (Versant Edge). As of the 2018-2019 winter season, the resort has 102 ski trails. Of those trails, 22 are labelled easy, 34 intermediate, 42 difficult and 15 expert. There are three snow parks and twenty official glades.

The resort features 14 ski lifts, consisting of 3 gondolas (including the open-air gondola in the pedestrian village and the Télécabine Casino Express), 6 detachable chairlifts, 2 regular chairlifts, and 3 magic carpets. An open-air gondola, or cabriolet lift, is used to transport skiers above the village from the parking lot to the bottom of the mountain. The 14 lifts total a 27,230 skiers per hour capacity.

Lake Tremblant, with the resort's pedestrian village visible in the left foreground

The surrounding hills and valleys are filled with trails for cross-country skiing and hiking. The ski trails connect with other ski trails in neighboring towns, making it possible for nature lovers to undertake ski excursions lasting several days going (or coming from) as far south as Blainville, Quebec on the outskirts of Montreal. The network of cross-country ski trails consists of over 100 km of terrain, much of which follows the Diable river and its adjacent coniferous forest.

The surrounding valleys of the Mont-Tremblant National Park have small lakes, dense boreal forests and thousands of vacation cottages. There are also world-class golf courses, hiking trails and small rivers suitable for canoeing and swimming.

There are many trails for mountain bikes and a special "route verte" rail trail paved for road bicycle use. The cycling/multifunctional path was built on an abandoned right-of-way of the Montreal-Mont Laurier railway; so cyclists do not have to share a path with motorized vehicles.

All content from Kiddle encyclopedia articles (including the article images and facts) can be freely used under Attribution-ShareAlike license, unless stated otherwise. Cite this article:
Mont Tremblant Resort Facts for Kids. Kiddle Encyclopedia.