Montrose is a city in Genesee County in the U.S. state of Michigan. The population was 1,657 at the 2010 census. Once part of the surrounding Montrose Township, the city itself incorporated in 1980, and both are now administered autonomously. 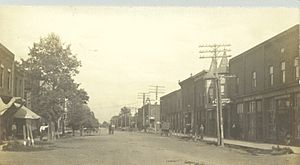 George Washington Ensign, originally from Stafford, New York, and family, became the first white residents of present-day Montrose Township in the spring of 1842. Organized in 1847 as Pewonagowink Township, after the area's former Ojibwe reservation of the same name, the township adopted its current name a few years later. Credit for the name change is ascribed to John Farquharson, a Scottish immigrant and township supervisor. The village of Montrose was incorporated from a portion of the township in 1899.

Montrose today is supported by local agriculture and commuter traffic to the greater Flint area. It has its own school system. Since 1972, it has held the Montrose Blueberry Festival annually, every third weekend in August. Its Montrose Historical & Telephone Pioneer Museum is Michigan's only telephone museum with hands on working exhibits of antique telephones.

According to the United States Census Bureau, the city has a total area of 0.98 square miles (2.54 km2), all land. The Flint River flows through Montrose.

There were 668 households, of which 36.7% had children under the age of 18 living with them, 41.2% were married couples living together, 17.8% had a female householder with no husband present, 5.2% had a male householder with no wife present, and 35.8% were non-families. 31.4% of all households were made up of individuals, and 13.2% had someone living alone who was 65 years of age or older. The average household size was 2.46 and the average family size was 3.07.

M-57 runs east and west through the city.

All content from Kiddle encyclopedia articles (including the article images and facts) can be freely used under Attribution-ShareAlike license, unless stated otherwise. Cite this article:
Montrose, Michigan Facts for Kids. Kiddle Encyclopedia.