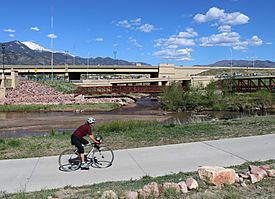 Monument Creek is an El Paso County, Colorado, stream on the Arkansas River water basin. It flows south from Mount Deception through Pikeview and Monument, and into Colorado Springs, where it meets up with Fountain Creek. It is 27.2 miles (43.8 km) from its northernmost boundary with National Forest Lands to its confluence with Fountain Creek near the intersection of Interstate 25 and U.S. Route 24.

The Monument Creek watershed is bounded on the north by the Palmer Divide, which divides the Platte River and Arkansas River watersheds. It extends from Black Forest west to Rampart Range. 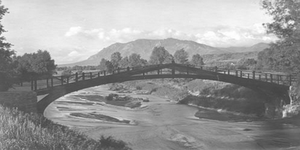 A significant flood of Monument Creek occurred on Memorial Day, 1935 when it overflowed from constant heavy rains over May 30 and 31. Within the Monument Valley Park, three bridges were lost, the swimming pool filled with mud, trees were uprooted, and meadows and walkways were covered with silt and debris. Shadow Lake was made into a puddle. The streets were filled with water. The 3 natural springs were capped over with silt and debris as a result of the flood. Lakes in the park were washed away and pavilions were destroyed. As a result, the park today looks very different than it did before the flood.

The Works Progress Administration (WPA) was engaged to renovate the park as the result of the flood damage. They built creekside stone retaining walls, bridges, rock steps and benches using timber and native stone as part of a rustic, picturesque design. A grandstand was built for one of the baseball fields. Stone markers were established with bronze plaques in recognition of the renovation work performed by the WPA. Features that were not replaced include a lake, some of the gardens, and rustic bridges.

In 2004 and 2006 the creek was declared "impaired" for fish and wildlife due to the presence of selenium from an unknown source. In 2004 it was also said to have been subject to an unknown biologic stressor. Sufficient water quality was attained by May 6, 2008.

All content from Kiddle encyclopedia articles (including the article images and facts) can be freely used under Attribution-ShareAlike license, unless stated otherwise. Cite this article:
Monument Creek (Arkansas River tributary) Facts for Kids. Kiddle Encyclopedia.