The Town of Monument is a statutory town situated at the base of the Rampart Range in El Paso County, Colorado, United States. Monument is bordered by Pike National Forest on the west, Colorado Springs and the United States Air Force Academy to the south, foothills and rock outcroppings to the north, and rolling plains to the east. Monument was first settled as a stop along the Rio Grande Railroad in 1872, and the area was incorporated as a town called Henry's Station in 1879, but the name was later changed to Monument. The town population was 5,530 at the 2010 United States Census, an increase of 181% from the population of 1,971 in 2000. 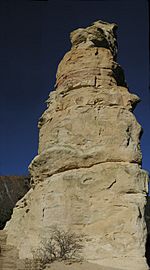 Monument Rock, the formation from which the town derives its name

Monument's first homesteaders arrived in 1865 to mark out the town's preliminary shape, but settlement increased when Monument became a stop along the Rio Grande Railroad in 1872. The area was incorporated as a town called Henry's Station, after prominent settler Henry Limbach, on June 2, 1879, and the first town meeting was held July 3, 1879. However, three years later the name was changed to Monument after Monument Creek and Monument Rock in the west. The first records of the town can be found in various volumes in the El Paso County Courthouse dating back to 1872. With the help of the railroad, which brought in necessities, people started small businesses and started to create a town.

According to the United States Census Bureau, Monument has a total area of 4.6 square miles (12 km2), all of it land.

There were 725 households out of which 45.4% had children under the age of 18 living with them, 59.2% were married couples living together, 11.9% had a female householder with no husband present, and 24.1% were non-families. 19.0% of all households were made up of individuals and 3.6% had someone living alone who was 65 years of age or older. The average household size was 2.72 and the average family size was 3.12.

The residents of Monument support many different organizations. It is home to various types of churches, such as Presbyterian, Catholic, Lutheran, Mennonite, Methodist, and nondenominational. Monument has several organizations that are unique to the community, and also several nationwide organizations. The local organizations in Monument and their mission statements include:

The Griffith Center for Children: to provide troubled children the environment and opportunities to become healthy, participating and productive members of society.

Also in Monument are the nationwide organizations:

Pikes Peak YMCA: To put Christian principles into practice through programs that build healthy spirit, mind, and body for all.

Monument Hill SERTOMA (SERvice TO MAn): To provide sponsorship of programs to aid the hearing impaired, and many other areas of need within the Tri-Lakes area, Colorado Springs and El Paso County.

Boy Scout Troop 514 is in possession of a special American flag better known as the Challenger flag. This flag was on board of the ill-fated last mission of the Space Shuttle Challenger and was recovered undamaged.

Monument is accessed from Interstate 25 at exit 161 and exit 158. State Highway 105 also runs through Monument.

All content from Kiddle encyclopedia articles (including the article images and facts) can be freely used under Attribution-ShareAlike license, unless stated otherwise. Cite this article:
Monument, Colorado Facts for Kids. Kiddle Encyclopedia.