Morrinsville is a provincial town in the Waikato region of New Zealand's North Island, with a population of approximately 7,000. The town is located at the northern base of the Pakaroa Range, and on the south-western fringe of the Hauraki Plains. Morrinsville is around 33 kilometres east of Hamilton and 22 kilometres west of Te Aroha. The town is bordered by the Piako River to the east and the Waitakaruru Stream to the south.

Prior to European settlement of New Zealand, the hills around present-day Morrinsville were occupied by the Ngati Werewere Māori people of the Ngati Haua Iwi, and the site of the present-day town was on or near to an old Māori route between the upper Waihou-Piako basin and the Ngaruawahia area. Following European settlement, some early European traders are believed to have traversed this route prior to 1834 when the Rev. J. Morgan travelled up the Piako River to near the future town site and crossed west to Horotiu, near Ngaruawahia. First recorded contact with European settlers occurred around 1850, with John Johnson trading with the Māori from 1852.

The 1860s saw an influx of European settlers to the area between Te Aroha and Matamata, and in 1873 two settlers from Auckland, Thomas Morrin, purchased the Kuranui No 1 Block from the local Māori on 13 December 1873 and founded the Lockerbie Estate which Morrin named after his father, who emigrated from the Scottish town of Lockerbie. In May 1874 Morrin purchases two further blocks, Motumaoho No.1 and No.2, and his estate now totaled over 30,000 acres. The fledgling village was to be the service centre for Morrin’s Lockerbie Estate and he built a blacksmith's shop, manager's house, the Jolly Cripple Hotel and general store and donated land for a school. Morrin hired Irish navvies from the gold fields to dig a network of drains to dry the land, enabling it to be used for agriculture, along with a need for houses for the workers. In 1882 Morrin surveyed the land for the site of the town proper, and deposited plans for ten streets: Anderson, Hamilton, Studholme, Moorhouse, Lorne, Canada, Cureton, Somerville, Thames and Thorpe (the first and last three streets were named after family members). 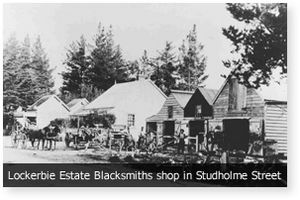 The Thames Valley and Rotorua Railway Company began the construction of a railway line from Morrinsville to Rotorua in 1879, and on 1 October 1884, the line from Hamilton to Morrinsville was opened. With construction progressing towards Paeroa and the line to Te Aroha opening on 1 March 1886, the town's population was now listed as 633 people. Further expansion of the railway towards Thames and Tauranga and along with extensive drainage of swamp land to the south and west of the town making available large areas for dairy farming, Morrinsville was created a town district in 1908 and in 1921 was constituted a borough.

Historically, Morrinsville was the railway junction of the Auckland–Thames and Auckland–Rotorua lines, which subsequently became the Thames Branch and the East Coast Main Trunk Railway (Tauranga) lines. Morrinsville Railway Station was opened on October 1, 1884, to the east off Studholme Street, at the junction of the two lines. A footbridge over the track was opened in 1913, connecting the station with the town from the end of Canada Street. The station was described as consisting of "two asphalt passenger platforms, and the station buildings contain a ladies' waiting room, a large general waiting room, a post office lobby with post and telegraph offices, a ticket office, and offices for the Inspector of Permanent Way. There are also large goods and engine sheds, and cattle loading yards. Five workmen's cottages adjoin the station, and the Bank of New Zealand Estates Company has a large building connected with the siding for seed-cleaning and storage purposes." The original station building was demolished in 1984 and a smaller building was erected approximately 300 metres to the west off Marshall Street, which is still used by KiwiRail for freight services. 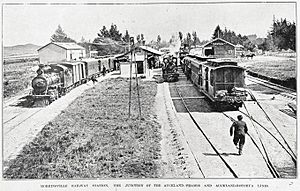 Passenger services are no longer provided to or from Morrinsville Railway Station. The Thames Branch closed on 28 June 1991 and the track subsequently lifted, although in 2004 a short shunt line – the Waitoa Industrial Line – reopened to facilitate freight trains for the Waitoa Dairy Factory. The East Coast Main Trunk Railway provided passenger services between Auckland and Rotorua – the Geyserland Express – and Auckland and Tauranga - the Kaimai Express; however, in 2001 it was announced that these services were too uneconomic to continue, and the last trains ran on 7 October 2001.

Morrinsville is located on State Highway 26 (SH26), running from Hamilton in the west to the Firth of Thames and the Coromandel Peninsula via Mangatarata in the north east. From the town centre it is approximately 7.5 km to the junction of State Highway 27 (SH27) in the east, providing access to the provincial town of Matamata to the south. 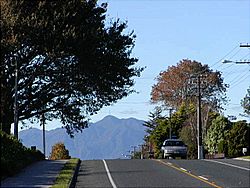 Main Road into Morrinsville - Mt Te Aroha in the background

Local bus services around Morrinsville are provided by the Waikato Regional Council with a daily service (#22) between Hamilton and Paeroa via Te Aroha.

All content from Kiddle encyclopedia articles (including the article images and facts) can be freely used under Attribution-ShareAlike license, unless stated otherwise. Cite this article:
Morrinsville Facts for Kids. Kiddle Encyclopedia.