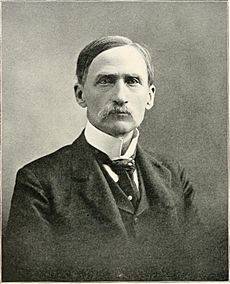 Morris Schaff (1840–1929), was a native of Etna Township, Ohio, USA. He wrote several books relating to U.S. Civil War history and the history of Etna and Kirkersville, in Licking County, Ohio.

Schaff was born on December 28, 1840, to John Schaff and Charlotte Hartzell Schaff on a farm in Etna Township, Ohio. Schaff lived in Kirkersville, Ohio between 1849 and 1858 when he was appointed by Congressman Samuel S. Cox to attend the United States Military Academy. He graduated from West Point in June 1862 and was commissioned as a Second Lieutenant of Ordnance. Schaff excelled in academics and developed excellent military skills while at West Point.

Schaff served in multiple battles and campaigns during the U.S. Civil War, including the Rappahannock Campaign and the Richmond Campaign. He served under several well-known U.S. generals during the Civil War: Major General Gouverneur Warren, General Joseph Hooker, General George Meade, and General Ulysses S. Grant. His wartime experiences greatly influenced the authorship of his 20th century books and articles. Schaff resigned from the Army on December 31, 1871. He later became known as General Schaff because he was appointed Brigadier General of the Massachusetts Militia in 1880.

After marrying Alice Page Schaff in 1868 and moving to Massachusetts, he became Superintendent of the Berkshire Glass Works for 11 years. Another 26 years was spent as a public service with the State Gas and Electric Light Commission of Massachusetts. Schaff embarked on a writing career late in life, publishing his first book in 1905. Morris Schaff died in Southboro, Massachusetts, on October 19, 1929.

All content from Kiddle encyclopedia articles (including the article images and facts) can be freely used under Attribution-ShareAlike license, unless stated otherwise. Cite this article:
Morris Schaff Facts for Kids. Kiddle Encyclopedia.