This girl has one brown eye and one hazel/green eye. 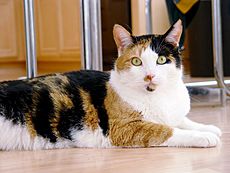 Mosaicism may result from:

The phenomenon was discovered by Curt Stern. In 1936, he demonstrated that recombination, normal in meiosis, can also take place in mitosis. When it does, it results in somatic (body) mosaics. These are organisms which contain two or more genetically distinct types of tissue.

People who have mosaicism are often called chimeras but this is a mistake. A mosaic is originally from a single fertilised egg, whereas a chimaera comes from two fertilised eggs.

Other causes of two-tone appearances

This is easiest to see with eye colours. When eye colours vary between the two eyes, or within one or both eyes, the condition is called heterochromia iridis (= 'different coloured iris'). It can have many different causes, both genetic and accidental. For example, David Bowie has the appearance of different eye colours due to an injury that caused one pupil to be permanently dilated.

On this page, only genetic mosaicism is discussed.

This phenomenon shows in the colouration of calico cats and tortoiseshell cats. These females are heterozygous for the X-linked colour genes: the genes for their coat colours are carried on the X chromosome. X-inactivation causes groups of cells to carry either one or the other X-chromosome in an active state.

X-inactivation is an epigenetic change, a switching off of genes on one chromosome. It is not a change in the genotype. Descendent cells of the embryo carry the same X-inactivation as the original cells. This may give rise to mild symptoms in female 'carriers' of X-linked genetic disorders.

Mutations in body cells (somatic mutations) cause groups of cells to differ in their genetics. Somatic mutation leading to mosaicism is common in the beginning and end stages of human life. Cancer research has shown that somatic mutations are responsible for most leukemia, lymphomas, and solid tumors.

All content from Kiddle encyclopedia articles (including the article images and facts) can be freely used under Attribution-ShareAlike license, unless stated otherwise. Cite this article:
Mosaic (genetics) Facts for Kids. Kiddle Encyclopedia.