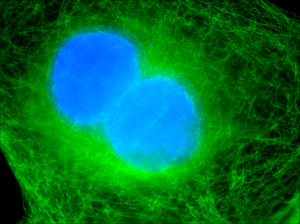 Cell division. All cells can be considered motile for having the ability to divide into two new daughter cells.

Motility is the ability of an organism to move independently, using metabolic energy. This is in contrast to mobility, which describes the ability of an object to be moved. Motility is genetically determined, but may be affected by environmental factors. For instance, muscles give animals motility but the consumption of hydrogen cyanide (the environmental factor in this case) would adversely affect muscle physiology, causing them to stiffen, leading to rigor mortis.

In addition to animal locomotion, most animals are motile (some move by passive locomotion) – the term applies to bacteria and other microorganisms, and to some multicellular organisms, as well as to some mechanisms of fluid flow in multicellular organs and tissue. Motile marine animals are commonly called free-swimming, and motile non-parasitic organisms are called free-living.

Motility also refers to an organism's ability to move food through its digestive tract.

Organisms that cannot move themselves are called sessile.

All content from Kiddle encyclopedia articles (including the article images and facts) can be freely used under Attribution-ShareAlike license, unless stated otherwise. Cite this article:
Motile Facts for Kids. Kiddle Encyclopedia.