Mount Airy, near Warsaw in Richmond County, Virginia, built in 1764, is a mid-Georgian plantation house, the first built in the manner of a neo-Palladian villa. It was constructed for Colonel John Tayloe II, perhaps the richest Virginia planter of his generation. Mount Airy is listed on the National Register of Historic Places as a National Historic Landmark and on the Virginia Landmarks Register. Colonel John Tayloe II's son-in-law, Francis Lightfoot Lee—a signer of the Declaration of Independence, and his wife Rebecca Tayloe, are buried on the estate. Francis Lightfoot Lee was one member of the only pair of brothers to sign the Declaration, with Richard Henry Lee being the other. Mount Airy was first and foremost a stud horse farm and department head for 10-12 separate slave plantations, and is still privately owned today by the Tayloe family.

Mount Airy is composed of a massive two-story central block above a high basement, 69 feet (21 m) long and 47 feet (14 m) deep, two curving one-story passageways, and two 36-foot (11 m)-square two-story end dependencies set forward. The five-part unit, 128 feet (39 m) long, encloses three sides of a semi-circular forecourt. This court is raised by a low terrace above the entrance drive and is reached by cut and molded stone steps, flanked by elaborate carved stone vases on pedestals. Set on a ridge, the house commands a wide view of the Rappahannock River Valley. The 3-foot-thick (0.91 m) walls of the central unit are made of dark-brown sandstone, carefully hewn and laid in courses of random height, with architectural trim in light-colored limestone. It is possible that the exterior may originally have been stuccoed though no trace remains. The north or entrance façade is approached from the forecourt by a flight of steps leading to a recessed loggia, whose square columns, faced with four Roman Doric pilasters, define three rectilinear openings. The projecting central pavilion is of rusticated limestone, with three windows in the second story and a crowning pediment. The south or garden facade is almost identical in composition except that the three entrances in the pavilion are spanned by round arches with heavily marked voussoirs and keystones, and the upper windows are unframed. The other windows are framed by stone architraves and sills, and the limestone belt course and rusticated angle quoins are very prominent. The existing broad hip roof, pierced by four interior chimneys located near the ridge, is a replacement of the original roof, possibly a hip-on-hip that was destroyed by fire in 1844. 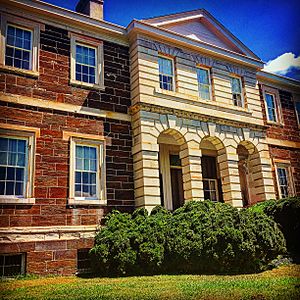 The south or rear elevation was undoubtedly taken directly from Plate LVIII of James Gibbs' Book of Architecture and the north elevation was less directly derived from a plate of Haddo House in Scotland, shown in William Adam's Vitruvius Scoticus.

The two stone two-story dependencies have hipped roofs and central chimneys and their corners are given the same quoin treatment as the main house. The connecting passageways, also of stone, are quadrants covered with shed roofs that are concealed from the north or front. At the junction with the central block, the roofs of the connections are stepped up to allow entrances to the main floor of the house.

The shaped terraced levels of its gardens are still clearly visible beneath its modern covering of lawn. Mount Airy has the earliest surviving Orangery in North America. A thriving organic vegetable and flower garden exists there today. 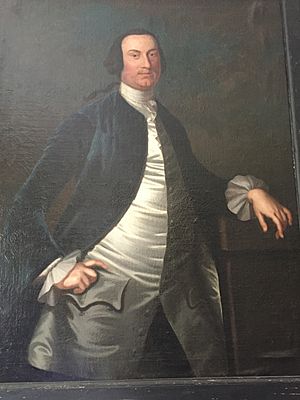 The land where Mount Airy is situated was owned by the Tayloe family of Virginia for over one hundred years when Colonel John Tayloe II, a fourth generation tobacco planter, began construction of the house. The project was started around 1748 with completion in 1758 and was actually a horse farm first and foremost. Tayloe used reference books of the day to incorporate architectural themes that give Mount Airy a feeling of strength. Several of racing heritage's greatest horses lived and were bred while at Mount Airy and owned or partly owned by John Tayloe II and they included; Sir Archy, Selima and Grey Diomed. The original stable and a few outbuildings including a smokehouse and dairy/ice-house survive to this day. The house has passed through ownership several times, but has always remained within the Tayloe family. Formerly owned by Mrs. H. Gwin Tayloe, Jr. (died 3 June 2011) it is now owned by Mr. John Tayloe Emery, Sr. and is still a private family residence. It owns a commanding view of the Rappahannock River valley perched upon a small hill looking westward towards the town of Tappahannock.

Col. Tayloe's son-in-law Francis Lightfoot Lee, a signer of the Declaration of Independence, was housed nearby, in a house built for him by Col. Tayloe, Menokin Plantation. The grave of Lee and his wife are located in the Tayloe family cemetery, approximately 300 yards (270 m) from Mount Airy. 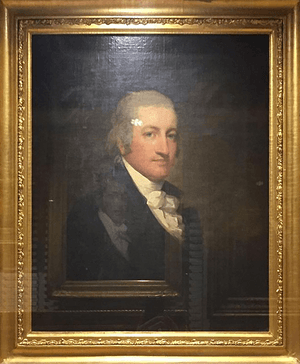 John Tayloe II and III, subsequently William Henry Tayloe, operated Mount Airy as a successful horse stud farm. John Tayloe II owned Hero, Juniper, Single Peeper, Yorick, Traveller, Nonpareil, and imported Jenny Cameron, Jolly Roger and Childers to Virginia, three of the most important colonial imports. The first race of note, of which we have any account, was won by Col Tasker's imported mare Selima, when six years old, at Annapolis in May of 1752. In December of that year, at Gloucester, VA, Selima beat Col William Byrd's "Trial", Col Tayloe's "Jenny Cameron" &"Childers" and Col Thornton's "Unnamed"--a sweepstakes, 500 pistoles, four mile heats. This race marks the beginning of the competition between Maryland and Virginia in the history of American turf.

A fire in 1844 gutted the house and destroyed most of the William Buckland wood work, it was rebuilt within its shell of brown sandstone with limestone quoins. The original floor plan was preserved during the reconstruction.

Taken from New York Times Sunday Book Review, January 2, 2015, Richard Dunn's 'A Tale of Two Plantations' a comparison and contrasting of Mesopotamia Plantation on Jamaica and Mount Airy Plantation in Virginia: In Virginia, John Tayloe III, master of Mount Airy from 1792 to 1828, bred horses and slaves. The horses he raced, earning him the reputation “as the leading Virginia turfman of his generation.” The slaves he worked and sold. “There were,” Author Richard Dunn counts, “252 recorded slave births and 142 slave deaths at Mount Airy between 1809 and 1828, providing John III with 110 extra slaves.” These slaves treatment Dunn notes, comparatively to Mas Tayloe, a fourth-generation enslaver, moved some of these surplus people around his other Virginia holdings and transferred others to his sons. The rest he sold, providing Tayloe with both needed capital and an opportunity to cull unproductive workers, keeping his labor force fit and young.

Tayloe’s son, William Henry, took over Mount Airy in 1828, and its slave population continued to increase, even as depleted soil led to crop shortfalls and declining profits. So where the Barhams responded to their demographic crisis by buying more slaves and intensifying production, the new master of Mount Airy opted for expansion. He struck out west with his brothers, acquiring cotton fields in Alabama. Between 1833 and 1862, William Henry moved a total of 218 slaves from white-fenced Virginia to the Cotton South’s slave frontier, a distance of 800 miles. Many of these captives were teenagers, “of the right age to learn how to pick cotton.” By this point, with the Atlantic slave trade closed, Virginia had become a net slave exporter; in the early 19th century, there were fewer than a million enslaved people in the United States, mostly concentrated in the coastal and piedmont South. Four decades later, there were four times as many, spread from Charleston to Texas, from Mount Airy to west-central Alabama, where William Henry Tayloe established his new estates.

Mount Airy is currently starring in a new HGTV show based on the restoration work being done to the West Wing of the manor house. The show called, American Rehab Virginia (née Colonial Rehab) is produced by Magnetic Productions and set to air in 2015.

Mount Airy was listed on the National Register of Historic Places on October 15, 1966. It was identified as a National Historic Landmark on October 9, 1960.

All content from Kiddle encyclopedia articles (including the article images and facts) can be freely used under Attribution-ShareAlike license, unless stated otherwise. Cite this article:
Mount Airy, Richmond County, Virginia Facts for Kids. Kiddle Encyclopedia.