Warsaw is a town in and the county seat of Richmond County, Virginia, United States. The population was 1,512 at the 2010 census.

The original name of the town was Richmond Courthouse. In 1831 the town's name was changed to Warsaw, after the news of the bloody Battle of Warsaw reached local residents. A number of other small towns in the United States changed their names to Warsaw at this time (Warsaw, Kentucky for instance), all as a result of sympathy in the United States for the November Uprising in Poland. Because Richmond Courthouse was still unincorporated in 1830, it is unclear who was responsible for the change of name to Warsaw. Historic sites nearby include Menokin, the former home of Francis Lightfoot Lee, Mount Airy and Sabine Hall. A former plantation estate Belle Mount is currently operated as a vineyard and winery within a few miles of Warsaw town limits.

In addition to Menokin, Mounty Airy, and Sabine Hall, Grove Mount and the Richmond County Courthouse are listed on the National Register of Historic Places. The formerly listed Bladensfield was destroyed by fire in 1996.

According to the United States Census Bureau, the town has a total area of 3.0 square miles (7.9 km²), all of it land. 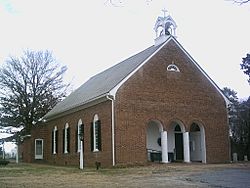 There were 445 households, out of which 22.5% had children under the age of 18 living with them, 39.1% were married couples living together, 10.8% had a female householder with no husband present, and 47.6% were non-families. 45.6% of all households were made up of individuals, and 24.3% had someone living alone who was 65 years of age or older. The average household size was 2.01 and the average family size was 2.81.

The climate in this area is characterized by hot, humid summers and generally mild to cool winters. According to the Köppen Climate Classification system, Warsaw has a humid subtropical climate, abbreviated "Cfa" on climate maps.

Warsaw is the location for the Northern Neck Regional Jail which was completed in 1995. The jail employs 100 people and has a capacity of 460 inmates with its most recent addition completed in 2000.

All content from Kiddle encyclopedia articles (including the article images and facts) can be freely used under Attribution-ShareAlike license, unless stated otherwise. Cite this article:
Warsaw, Virginia Facts for Kids. Kiddle Encyclopedia.