Warsaw is a home rule-class city in and the county seat of Gallatin County, Kentucky, United States, along the Ohio River. The name was suggested by a riverboat captain, who was reading Thaddeus of Warsaw, by Jane Porter, at the time. The city had a population of 1,615 at the 2010 census, down from 1,811 at the 2000 census.

Warsaw is located in north-central Gallatin County, along the south bank of the Ohio River. Across the river is the unincorporated community of Florence, Indiana; the closest river crossing is the Markland Dam Bridge, 3.5 miles (5.6 km) to the west (downstream). U.S. Route 42 passes through the center of town, leading northeast 35 miles (56 km) to Covington and southwest along the Ohio River 17 miles (27 km) to Carrollton. Kentucky Route 35 leads south from Warsaw 6 miles (10 km) to Interstate 71 and the Kentucky Speedway in Sparta.

Warsaw began as a landing on the Ohio River in 1798 called "Great Landing". In 1805, founder Colonel Robert Johnson surveyed and built a road from this landing to his former home in Scott County, Kentucky. The landing soon became a busy shipping port.

In 1831, the town was renamed "Warsaw" so the townspeople could have a post office. The post office was established July 18, 1832, with W.F. Clinton as postmaster. In 1837, the Gallatin County seat was moved from Port William (now Carrollton) to Warsaw. The courthouse is now the oldest operating one in the state. The oldest home in Warsaw is the Henry Yates House, a home built of log construction circa 1809.

On December 4, 1868, 80 people died in the Ohio River steamboat collision of the United States and the America near Warsaw.

The Warsaw Historic District was named to the National Register of Historic Places in 1982. It is roughly bounded by W. High, E. Franklin, Washington, Market, Main, 3rd, 4th and Cross streets. It features Italianate and Gothic Revival architecture. 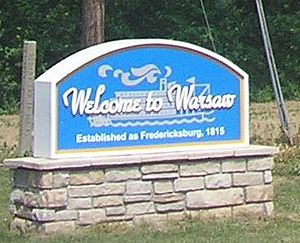 There were 737 households out of which 30.8% had children under the age of 18 living with them, 40.2% were married couples living together, 14.9% had a female householder with no husband present, and 38.7% were non-families. 33.6% of all households were made up of individuals and 16.6% had someone living alone who was 65 years of age or older. The average household size was 2.31 and the average family size was 2.93.

All content from Kiddle encyclopedia articles (including the article images and facts) can be freely used under Attribution-ShareAlike license, unless stated otherwise. Cite this article:
Warsaw, Kentucky Facts for Kids. Kiddle Encyclopedia.