Mount Emerson is named in honor of the essayist, poet and philosopher Ralph Waldo Emerson. John Muir wrote in a letter to Mrs. Ezra S. Carr that "I have named a grand wide-winged mountain on the head of the Joaquin Mount Emerson. Its head is high above its fellows and wings are white with ice and snow." It has been suggested that Muir might have intended to confer the poet's name on Mount Humphreys which had already been named by the Whitney Survey. 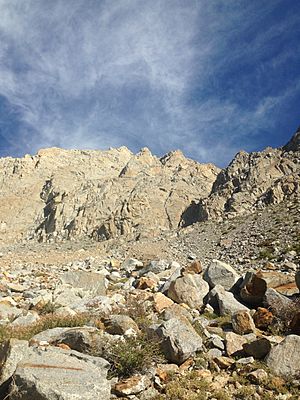 Mount Emerson viewed from the east

All content from Kiddle encyclopedia articles (including the article images and facts) can be freely used under Attribution-ShareAlike license, unless stated otherwise. Cite this article:
Mount Emerson (California) Facts for Kids. Kiddle Encyclopedia.