Mount Huntington is a striking rock and ice pyramid in the central Alaska Range, about 8 miles (13 km) south-southeast of Denali. It is also about 6 miles (10 km) east of Mount Hunter, and two miles west of The Rooster Comb. While overshadowed in absolute elevation by Denali, Huntington is a steeper peak: in almost every direction, faces drop over 5,000 feet (1,520 m) in about a mile (1.6 km). Even its easiest route presents significantly more technical challenge than the standard route on Denali, and it is a favorite peak for high-standard technical climbers. 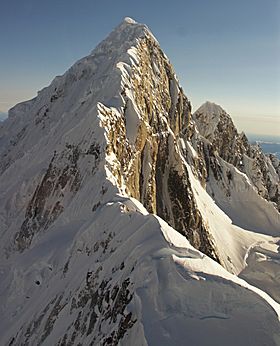 Mount Huntington was first climbed in 1964 by a French expedition led by famed alpinist Lionel Terray, via the Northwest Ridge, from then on also called the French Ridge. The second ascent the following year, via the West Face/West Rib, is reported by David Roberts in The Mountain of My Fear. The mountain can be accessed either from the West Fork of the Ruth Glacier, on the north side of the mountain, or the Tokositna Glacier, on the south side. 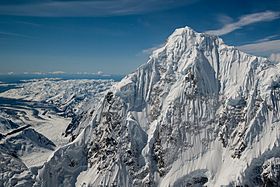 All content from Kiddle encyclopedia articles (including the article images and facts) can be freely used under Attribution-ShareAlike license, unless stated otherwise. Cite this article:
Mount Huntington (Alaska) Facts for Kids. Kiddle Encyclopedia.