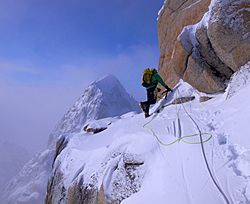 Roskelley near the summit of a mountain in the Alaska Range, April 2013

Jess Roskelley (July 13, 1982 – April 16, 2019) was an American mountaineer. On May 21, 2003, he became the youngest American to reach the summit of Mount Everest. He was born in Spokane, Washington. He is the son of mountaineer John Roskelley.

Roskelley, along with David Lama and Hansjörg Auer, died in an avalanche on April 16, 2019. The men were climbing Howse Peak in Banff National Park of the Canadian Rockies. Their bodies were found on April 21, 2019.

All content from Kiddle encyclopedia articles (including the article images and facts) can be freely used under Attribution-ShareAlike license, unless stated otherwise. Cite this article:
Jess Roskelley Facts for Kids. Kiddle Encyclopedia.