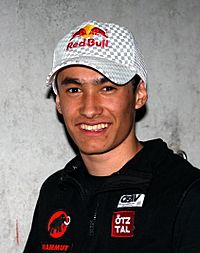 David Lama (Nepali: डेभिड लामा; 4 August 1990 – 16 April 2019) was an Austrian sport climber and mountaineer. He won the European Championship in lead climbing in 2006 and the European Championship in bouldering in 2007. He was also the winner of the IFSC Climbing World Cup in 2008. He retired from sport climbing in 2011 to focus on mountaineering. He is known for his 2012 first free ascent of the compressor route (south-east ridge) on Cerro Torre in the Andes.

Lama was born in Innsbruck. His father is a mountain guide from Nepal and his mother is Austrian.

Lama, along with Hansjörg Auer and Jess Roskelley, died in an avalanche on 16 April 2019. The men were climbing Howse Peak in Banff National Park of the Canadian Rockies. Their bodies were found on 21 April 2019.

All content from Kiddle encyclopedia articles (including the article images and facts) can be freely used under Attribution-ShareAlike license, unless stated otherwise. Cite this article:
David Lama Facts for Kids. Kiddle Encyclopedia.