Mountain View Cemetery is the only cemetery in the City of Vancouver, British Columbia. Opened in 1886, it is located west of Fraser Street between 31st and 43rd Avenues. It is owned and operated by the City of Vancouver and occupies 0.43 square kilometres (110 acres) of land, containing more than 92,000 grave sites and over 145,000 interred remains. The first interment took place on February 26, 1887. The first interment was supposed to happen in January 1887 but poor weather, a new road, and a broken wagon wheel resulted in the intended first occupant being temporarily buried outside the cemetery. His body was relocated to inside the cemetery months later.

Only one existing cemetery in the vicinity, Fraser Cemetery in New Westminster (established in 1870), is older than Mountain View. When Mountain View Cemetery opened in 1886, it supplanted burial grounds in what was designated Stanley Park that same year as the city's cemetery. The original parcel of land now known as the "Old Section" is bounded by Fraser Street on the east, 37th Avenue on the south, 33rd on the north, and three remaining trees from what was once a row of tall Lawson Cypress trees on the west. Land on the north of this was purchased in 1901 for an expansion and became the "Horne I Addition" – named after the developer who sold the land. The Jones farm between 37th and 41st Avenues was added in 1910 as the Jones I and Jones II Additions, and in 1922, an additional piece was acquired west of the Horne I Addition. The "1919 Addition" is a tract bounded by 41st and 43rd Avenues, and contains many victims of the Spanish flu pandemic that took many hundreds of lives of local residents. The final addition is the Abray Park Addition on the western side, acquired in 1941 through a land swap with the Vancouver Park Board and was named after a squatter, Nonus Abray, who previously lived on the land and tended an orchard and grazed cattle there. Burial sites historically were often grouped together along the lines of religion (e.g., Jewish), nationality (e.g., Chinese and Japanese), or organizational affiliation (e.g., Freemasons and Oddfellows). Other groupings are pauper grave sites and war veterans.

The New Chelsea Housing Society and the Department of Veterans' Affairs, unveiled a memorial consisting of three granite stelia in 1983 dedicated to all Canadian military members who have died. The cemetery also has more than 12,000 Canadian military graves. The Commonwealth War Graves Commission maintains the graves of 579 Commonwealth service personnel – 319 from World War I and 260 from World War II. The war graves of the former war are in a special Soldiers' Plot, while those of the latter are either concentrated in a Veterans' Plot or scattered within the cemetery. Most of the airmen died serving at the Royal Canadian Air Force base at Sea Island, and many sailors were from the HMCS Discovery naval station of the Royal Canadian Navy Volunteer Reserve.

In 2005 Birmingham & Wood Architects were commissioned to design three buildings and collaborate in the design of landscape elements as part of the upgrading of Mountain View Cemetery. The three structures included an administration building, landscape maintenance facility and a memorial service building with associated functions. The Celebration Hall has become a popular venue for cultural events adding to the City's roster of performance spaces.

Mountain View has been one of the few North American cemeteries allowing 2 members of a family to share the same grave. As of January 1, 2020, City Council expanded this practice via a by-law allowing individuals to share their own or their deceased loved one's grave with up to 3 non-family members or strangers. This option is only available for new graves and primarily designed to reduce the environmental footprint of one's burial. It is also a cheaper alternative as plot cost is divided among its individual buyers. Those opting for this arrangement would be buried on top of one another in a single 4'x8'x9' vertical column and must consent to be interred in a more environmentally-sustainable option, such as 'a shroud or biodegradable container'. 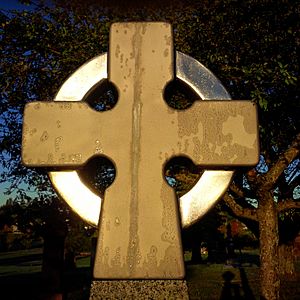 Monument on top of the gravestone for Malcolm Alexander MacLean, the first Mayor of Vancouver, at Mountain View Cemetery

All content from Kiddle encyclopedia articles (including the article images and facts) can be freely used under Attribution-ShareAlike license, unless stated otherwise. Cite this article:
Mountain View Cemetery (Vancouver) Facts for Kids. Kiddle Encyclopedia.