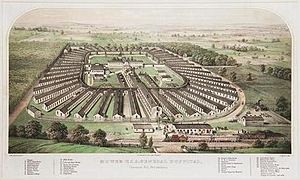 This is a lithograph of Mower Hospital. It was made by James Queen. He made it around the year 1863.

Mower Hospital was a military hospital in a neighborhood named Chestnut Hill, which is in the city of Philadelphia, Pennsylvania. It was built in 1862 for soldiers who were in the American Civil War. It was run by the United States Army.

Architect John McArthur, Jr. designed the hospital. It was near the Philadelphia and Reading Railroad so hurt soldiers could be brought to the hospital fast. It was open from January 1863 until May 1865.

It had room for 40,000 patients. It was shaped so that people would not get sicker or get an infection from other sick and injured people. It had many things for the people who worked there, and for the injured soldiers. People could go to a barber shop and go grocery shopping. It had lights powered with gas and fresh water.

The hospital does not exist anymore.

All content from Kiddle encyclopedia articles (including the article images and facts) can be freely used under Attribution-ShareAlike license, unless stated otherwise. Cite this article:
Mower Hospital Facts for Kids. Kiddle Encyclopedia.