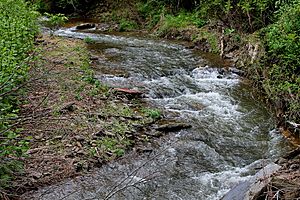 Mugser Run about 3.6 miles (5.8 km) downstream of its headwaters

Mugser Run is a 8.0-mile-long (12.9 km) stream in Columbia County, Pennsylvania, in the United States. It is a tributary of South Branch Roaring Creek. Mugser Run is located in Locust and Cleveland Townships. Forested land and agricultural land are by far the most common uses of land in the watershed. Brown trout and rainbow trout are found in the creek. The main rock formations are the Trimmers Rock Formation and the Catskill Formation–Buddys Run formation.

Mugser Run starts in near Pennsylvania Route 42 in Locust Township, between Numidia and Little Mountain. The creek flows west into Cleveland Township after a short distance. Upon entering Cleveland Township, it turns south and briefly skirts the northern edge of Little Mountain before turning north again. It passes by the community of Fisherdale and turns west, then turns north. For a while, the creek flows into a deep and narrow river valley. The valley widens out as the creek passes by a covered bridge. Just before its mouth, it passes by Knoebels Amusement Resort. The creek empties into South Branch Roaring Creek at the Northumberland County line.

Mugser Run has at least one tributary.

The southern edge of the Mugser Run watershed is on Little Mountain and the northern edge is in the rolling hills of Cleveland Township. The western edge is in Locust Township and the eastern edge is at the Columbia/Northumberland County line.

The area of the Mugser Run watershed is 11.9 square miles.

Mugser Run received a visual assessment in the fall of 2007, and was given scores on a scale of 0 to 28, with higher scores indicating higher quality. The scores of Mugser Run ranged from 19 to 20.

Mugser Run is located entirely within the ridge and valley physiographic province.

Mugser Run is a trout stream. Its headwaters are considered Class A Wild Trout Waters. In 1985, it was stocked with brown trout and rainbow trout. The concentration of brown trout in the creek ranges from about 76 to 78 kilograms per hectare. The fish range from 0.25 centimeters to 39.9 centimeters.

The canopy coverage of Mugser Run ranges from 50% to 85%. The concentration of chlorophyll ranges from 2.00 to 2.66 micrograms per cubic centimeter.

All content from Kiddle encyclopedia articles (including the article images and facts) can be freely used under Attribution-ShareAlike license, unless stated otherwise. Cite this article:
Mugser Run Facts for Kids. Kiddle Encyclopedia.